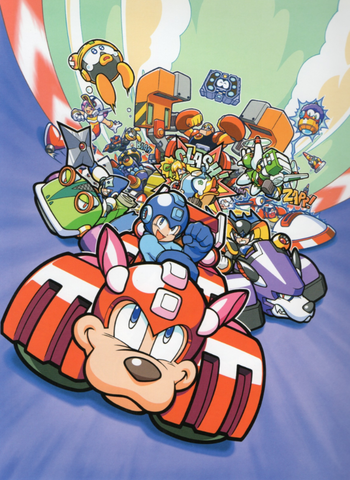 The Blue Bomber takes to the Road!
Advertisement:

Mega Man: Battle & Chase is a spin-off title to the Mega Man (Classic) series, developed for the PlayStation in 1997 by Capcom. Among many other titles in the series, it would remain outside of North America until being included as a bonus unlockable in the Mega Man X Collection for PlayStation 2 and Nintendo GameCube in 2005.

Battle & Chase itself is an in-universe racing show, where the winner is awarded an amazing cash prize of 10 Million Zenny. Mega Man plans on entering the race to win the prize money, and help Dr. Light repair one of his computers which broke after a lightning storm. However, many other competitors are also racing to collect the prize money.

Playable racers are as follows: