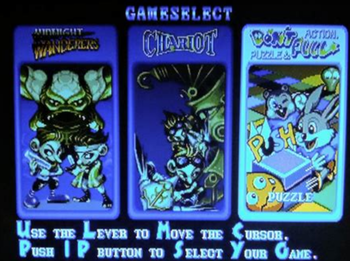 An unusual coin-op made by Capcom in 1991, composed of three different games among which the player could choose: a Puzzle Game (Don't Pull), a Platform Game (Midnight Wanderers: quest for the Chariot) and a Shoot 'em Up (Chariot - adventure through the sky). Strangely enough, Chariot was also the direct sequel to Midnight Wanderers.

Since Don't Pull has no plot to speak of, here's the story behind the world of Midnight Wanderers and Chariot: the demon Gaia stole the legendary Chariot of Light, symbol of the Kingdom of Ashtar, and turned all the inhabitants of Ashtar into wooden statues. Lou and Siva, the wanderers of the title, are the kingdom's only hope: they must enter Gaia's castle, defeat the demon and use the magical Card of the Dawn to re-awaken the Chariot. After having recovered the artifact, Lou and Siva must use it to fly into the sky and save the princess of Ashtar who was kidnapped by Gaia's superior, Lar.

The game(s) was ported to Sega Saturn and PlayStation in 1998, and later included in Capcom's Classics Collection for PlayStation 2 and Xbox. Lou and Siva made only a few appearances in subsequent Capcom games, most notably in Marvel vs. Capcom: Clash of Super Heroes as helpers.