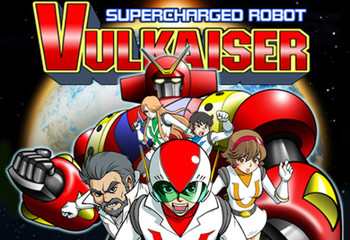 It's the year 1977 and the evil Gogoh Army from space is attacking Earth! Japan (and the entire planet)'s only hope comes from the Supercharged Research Center, who developed the Combining Mecha Vulkaiser to fight against the invaders. Go, Vulkaiser! Restore peace to the Earth!

Supercharged Robot Vulkaiser, aka. VULKAISER in all caps, is a Horizontal Scrolling Shooter developed by Astro Port (the makers of SATAZIUS) and released on Steam in Summer 2015. The game is made to be a huge pastiche of 70s and 80s Super Robots, especially Mazinger Z, Voltron and Voltes V, complete with episode titles and big yellow English subtitles, in the form of a Bullet Hell shooter.

The basis of the gameplay is that at fixed points the Vulkaiser can combine with one of the other four Kaiser modules and gain new special attacks. You only have one life, and when one of the Kaisers is destroyed it is gone forever, but the robots are repaired in between levels, replenishing a bit of life. Shooting charges up the modules' special weapons, that when fired cancel some of the enemy bullets.

is another bullet hell game set in the same universe, this time a Vertical Scrolling Shooter. The wacky premise is that Meglilo, a Magical Girl from the Magic Kingdom, gets killed during one of the battles between the Gogoh Army and the Supercharged Research Center, and Prof. Amamori himself rebuilds her in the form of a cyborg with huge firepower and the ability to stop time.

Now is the time to combine the strength of five: