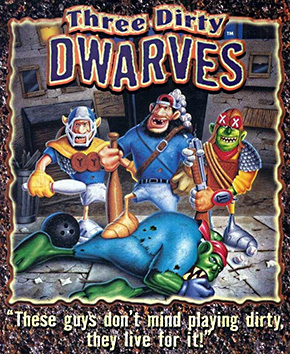 Three Dirty Dwarves is a Beat 'em Up game released for the Sega Saturn and PC in 1996. It was published by SegaSoft and developed by Appaloosa Interactive. The lead animator for the cartoon cutscenes was Szórády Csaba, formerly of Pannonia Film Studio.

The actual plot of the game focuses on four genetically-altered children, Laura, Gregory, Billy, and Kyle, who are being held captive in a military genetics lab at WST (Weapons Systems Technology). Colonel Briggs, the Drill Sergeant Nasty in charge of the base, wants them to use their genius to create super soldiers. Instead, they've devised a plan of escape using a tabletop game they've created by combining Einstein's theory of relativity, superstring theory, and the laws of chance, creating a world within the game.

In it, their avatars, three Dwarves named Greg, Tatonic and Corthag, battle in Middle Earth to reach an inter-dimensional gateway that would send them to this world so they can save the kids. Briggs decides to have the kids separated from each other and the game, but not before they summon a portal in the game that sends its three heroes to Earth. Unfortunately, their enemies use the same portal and follow them to earth. The dwarves catch fire in Earth's orbit and end up in a sporting goods shop, where they believe they've been gifted with the weapons and armor they need to fend off their enemies and save the children from the genetics lab.