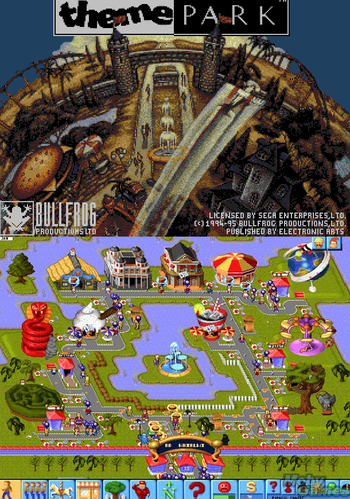 Theme Park is a Space-Management Game, lead developed by 17 year-old Demis Hassabis for Bullfrog Productions and released in 1994. It revolves around the construction of a theme park and catering to the park's visitors.
Advertisement:

The game is comprised of several missions. Each mission starts out on a blank lot, where the player must construct his theme park from scratch. This includes placing various rides (like a Haunted House or Rollercoaster), shops (food, drink and gifts), lavatories, decorative items, and the roads connecting these things to one another (and the front gate). Once the gates are opened, visitors begin arriving and will meander around the park to enjoy themselves. The objective is to maximize the amount of money your visitors pay during their stay, which is primarily achieved by keeping them as happy as possible for the duration.

The player has no control over the park's visitors, so the key is to lay the park out in a way that it would be easily navigable, making sure to put all the amenities within reach at all times, and generally drawing visitors towards the more expensive rides and shops.

Despite being the first of its kind in many ways, probably the most interesting feature of this game was the ability to create complex rollercoaster designs from scratch using various segments. This idea later evolved into the game's Spiritual Successor RollerCoaster Tycoon, where this game-mechanic took the center stage.

Theme Park was soon followed by an important (and much more successful) sequel called Theme Hospital. It also sparked a whole genre of Space Management Games revolving around similar ideas. Theme Park was also remade 5 years after its original release, using 3D graphics, and called Theme Park World. Shortly after, EA bought Bullfrog over and re-christened Theme Park World as Sim Theme Park (the game has no relation to SimCity, indeed it wasn't even designed by Will Wright).