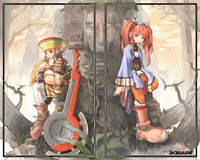 An 1999 Action RPG by Square (now Square Enix) for the PlayStation, which was released as Dewprism in Japan. The player can choose to follow the adventures of Rue or Mint as they quest for a powerful artifact, known as the Dewprism, that can reshape reality.

Rue has been living with Claire, a friend he loves as a sister, since she rescued him years ago. When she is killed shielding him from the "Arm of Death," he vows to find the Dewprism in order to bring her back. Rue's story is more serious with truly exceptional writing. He wields a large axe in combat and can turn into monsters he slays, gaining their abilities.

Mint is a princess horrified to learn she's been passed over in the line of succession for her younger sister. Enraged, she vows to find the Dewprism and take back what is rightfully hers, and then some. In fact, nothing less will do than rulership over the whole world. Mint serves as comedic relief and a selfish foil for Rue's selflessness. Her story is generally considered to be less powerfully written but more fun. She wields a pair of golden hoops that allow her to use magic.

A manga was planned, but later scrapped, though various fan works do exist including a fangame, Duo Princess, by EasyGameStation, starring Mint and Maya.