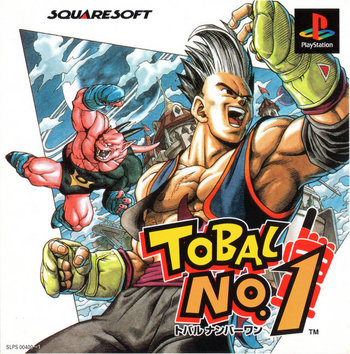 The year is 2027. On the planet Tobal, there exists a special ore known as Molmoran, which can be used as an energy source, but the locals have a very creative way of deciding who can mine it — a fighting tournament. Humans and aliens alike compete, with the prize being given by Emperor Udan... assuming that he, too, is bested in the competition.

Tobal No. 1 arrived on the PlayStation thanks to Dream Factory in 1996, being Squaresoft's first foray onto the console prior to the launch of their smash hit, Final Fantasy VII, for which Tobal actually started Square's practice of including demo CDs with their games. It was followed one year later by Tobal 2, which expanded upon the original in just about every way, be it roster, graphics, or sheer scope.

Both games feature the visual style and character design of Akira Toriyama and are known for including, in addition to the fighting game standard single-player and versus modes, a Quest mode which plays out like a fairly simplistic dungeon crawler RPG, reusing the fighting engine for enemy encounters. Said fighting engine was fairly unique among polygonal fighters, as it allowed for fairly free range of motion around the arena, and the characters reacted realistically to where and how they were hit (for instance sweeping one leg would cause a stumble; sweeping both would knock them down).

These games received a Spiritual Successor in the form of Ehrgeiz, also by Dream Factory.