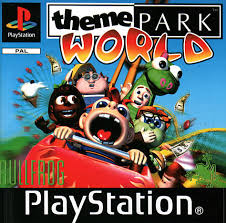 Theme Park World, the official sequel to Theme Park, also known as Sim Theme Park and Theme Park: Roller Coaster in North America and Brazil, is a Space-Management Game developed by Bullfrog. It revolves around the construction of a theme park and catering to the park's visitors. It was released in 1999 and 2000, respectively on Microsoft Windows, Apple Macintosh, PlayStation and PlayStation 2.
Advertisement:

The game is comprised of four worlds-Lost Kingdom, Halloween World, Wonderland, and Space Zone. Each zone starts out on a blank lot, where the player must construct their theme park from scratch. This includes placing various rides, shops, lavatories, decorative items, and the paths connecting these things to one another (all of which are themed to each area). Once the gates are opened, visitors begin arriving and will meander around the park to enjoy themselves. The objective is to maximize the amount of money your visitors pay during their stay, which is primarily achieved by keeping them as happy as possible for the duration.

The player has no control over the park's visitors, so the key is to lay the park out in a way that it would be easily navigable, making sure to put all the amenities within reach at all times, and generally drawing visitors towards the more expensive rides and shops. This is in part helped by an ant-like thing simply known in-game as "The Advisor" (but commonly referred to by fans as "Buzzy"), who serves as your guide and occasionally pops up to tell you when to construct additional pylons or whatever it is you need to do.