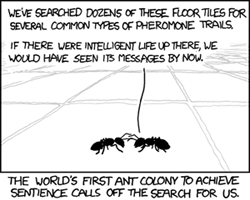 "Sometimes I think the surest sign that intelligent life exists elsewhere in the universe is that none of it has tried to contact us."
— Calvin, Calvin and Hobbes
Advertisement:

The Fermi Paradox, in brief, raises the question of why we have yet to observe evidence of extraterrestrial life. The simplest explanation would of course be that such life is extremely rare compared to just how mind-rendingly, jaw-droppingly, eye-wateringly, tooth-shatteringly huge the universe is, how hard it is to generate signals detectable across light-years of space, and what a small part of its lifespan we've been witness to, but many creators prefer to introduce a more interesting reason into their universes.

This can serve two functions. On the one hand, it can provide the author with some excuse for referencing alien cultures, providing alien archaeological sites, and similar without actually introducing a viable alien culture. On the other, it can allow for the creation of interstellar societies that would otherwise appear implausible, especially when they've been so active in our own backyard lately that we would presumably have noticed them in reality.

Contrast Absent Aliens, in which the simple explanation is taken as correct.