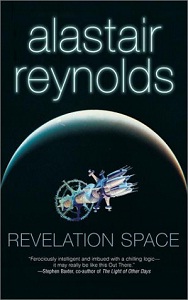 Revelation Space is the first novel in the Hard Sci-Fi Space Opera series of the same name, by Alastair Reynolds.

The book opens in the year 2551 on the planet Resurgam, a newly-founded colony on the edge of human space. The colony hasn't had time to terraform yet, leaving most of the planet a wasteland wracked by ruinous dust storms. Dan Sylveste, brilliant scientist and leader of the colony, oversees an archaeological excavation of a long-dead alien civilization's remains. He discovers they had achieved a much higher level of technological sophistication than previously thought...before they were wiped out in a mysterious cataclysm. Fearing the same could befall humanity, Sylveste races against time to investigate an ancient genocide before dust storms, unruly colonists, and his own sordid past catch up with him.

Meanwhile, in the past, the ship Nostalgia for Infinity is enroute to the planet Yellowstone. Designed to carry thousands of colonists in suspension, its only passengers now are a handful of Ultras — transhumans adapted to the rigors of long interstellar spaceflight. They're desperate to find Sylveste: their captain has been infected with the "Melding Plague" and they believe only Sylveste can save him. But in a universe without faster-than-light communication, they don't know Sylveste left Yellowstone more than 15 years ago. On Yellowstone itself, an assassin named Ana Khouri has been hired to infiltrate the Nostalgia for Infinity once it arrives. Her mission? Follow it to Sylveste and kill him, at all costs.

Due to the time dilation effects of light-speed travel, the novel juxtaposes multiple plotlines, separated by decades, as happening concurrent with each other. The novel also introduces an expansive and complex universe.