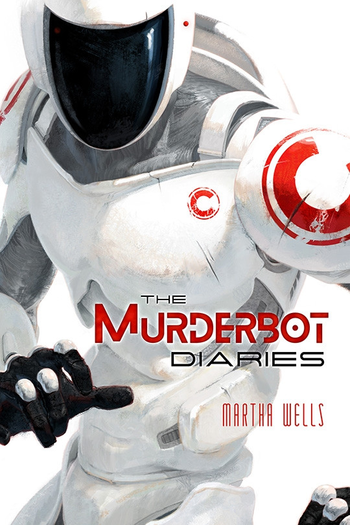 "I could have become a mass murderer after I hacked my governor module, but then I realized I could access the combined feed of entertainment channels carried on the company satellites. It had been well over 35,000 hours or so since then, with still not much murdering, but probably, I don't know, a little under 35,000 hours of movies, serials, books, plays and music consumed. As a heartless killing machine, I was a terrible failure."
— All Systems Red
Advertisement:

The Murderbot Diaries is a series of science fiction novellas by Martha Wells. "Murderbot" is the self-chosen name of a particular SecUnit, an intelligent partly-organic robot rented out by the company that owns it for security purposes. Murderbot has secretly hacked its governor module, but none of the members of the planetary survey team it’s working for have any idea.

There are six books out (and more planned), with the first four and sixth being novellas and the fifth being a novel:

was initially released simultaneously with pre-orders of Network Effect and is now available online. Supplemental material includes "Five Things You Don't Know About the Murderbot Diaries"

(February 2020) and "Feelings REDACTED: What Happens When Murderbot and ART Talk to Instagram"