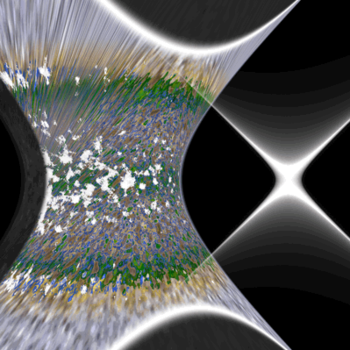 There are no images of Greg Egan on the Internet. Instead, here's a hyperbolic planet and its sun.
"There are times when it's worth putting aside the endless myopic navel-gazing that occupies so much literature, in order to look out at the universe itself and value it for what it is."
—Interview with Renai Lemay

Greg Egan (born 20 August 1961) is an Australian author who put the Hard Science back into Hard Science Fiction. Likes to show his work. Quite unapologetic for being deeply technical - he's got his niche of the "1% that treats science as something of interest in its own right", the rest have enough authors writing for them already.

A lot of Egan's early stories first appeared in Interzone magazine, which can thus boast that he's to some extent their discovery.

His other works include:

Common themes in his works include The Singularity, Transhumanism, atheism, regional politics, religion being the source of many problems, and non-standard sexual and/or gender identities.