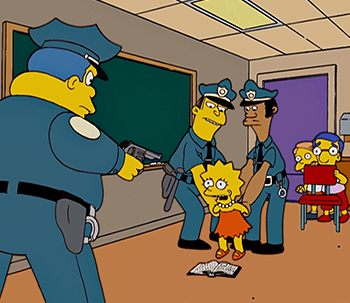 "There so many worse crimes! Why are you persecuting me?!"note And she is proven right five seconds later, to boot.
Carl: Let's make litter outta these literati!
Lenny: That's too clever. You're one of them!
—The Simpsons
Advertisement:

Some communities regard all intellectuals as suspicious at best, and a danger to society at worst. This kind of prejudice sometimes crops up in isolated rural areas where most people lack a formal education and intellectuals are outsiders by default.

Other times, such an attitude is the hallmark of a totalitarian dictatorship. If knowledge is power, then all that book-learning could pose a threat to the regime — better to keep the people ignorant and complacent. In a speculative fiction setting, the government might fear that scientists or other scholars are dangerously close to uncovering the truth behind The Masquerade, and must be suppressed at all costs.

Sometimes, the fear and hatred of intellectuals stems from a past disaster: if half the world was destroyed in the Great Robot War of 3052, for example, the survivors may be wary of mechanical engineers. More often than not, however, the educated are merely a convenient scapegoat. After all, nobody likes a know-it-all. That jerk with his fancy college degree thinks he's better than you! Like other forms of institutionalized prejudice, this can be a brutally effective tool for directing the public's anger away from the government.

An Up to Eleven situation of this trope (mainly in SF) happens when the intellectuals lean so much on the side of Übermensch that they seem to form a new species to any "normal" human. Expect Torches and Pitchforks, maybe also Humans Are the Real Monsters.

See also Book Burning, which often accompanies the persecution of academics, and Tall Poppy Syndrome, where any sort of specialness is equally dangerous. Compare and contrast Evil Luddite and Intelligence Equals Isolation. For works that portray intelligent or learned people in a negative light, see Dumb Is Good and Science Is Bad.