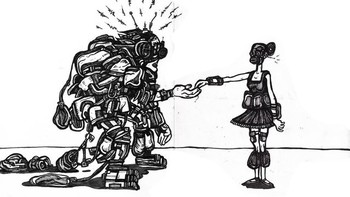 "Harrison Bergeron" is a dystopian sci-fi short story by Kurt Vonnegut, first published in October 1961. It is usually seen as a darkly satirical critique of forced egalitarianism, but it can also be interpreted as a Stealth Parody of the above, since both the forced egalitarianism and the Übermensch who fights against it are depicted as completely over-the-top.

"The year was 2081, and everyone was finally equal. They weren't only equal before God and the law. They were equal every which way. Nobody was smarter than anybody else. Nobody was better looking than anybody else. Nobody was stronger or quicker than anybody else." The U.S. Constitution has been amended to allow the Handicapper General, Diana Moon Glampers, to physically handicap anyone with an advantage. The story centers on George and Hazel Bergeron and their fourteen-year-old son Harrison, who has been imprisoned because he constantly outgrows his handicaps. It begins with George and Hazel watching television when breaking news announces that Harrison has escaped from prison, followed by Harrison bursting into the TV studio. He is revealed as being not just above-average, but outright superhuman. Among other things, he can fly.

In many ways the story is an expansion of scenes from Vonnegut's earlier work The Sirens of Titan, where the theme of enforced equality was introduced; however, "Harrison Bergeron" takes a far more dystopian view of the concept.

There is also a 1995 made-for-TV movie based on the story, starring Sean Astin as Harrison. The movie follows his childhood and later recruitment by Administrator John Klaxon into the National Administration Center, a secret cabal of geniuses within the government who ensure that the handicapped America functions, and the consequences of his love affair with Phillipa, an illegally handicap-free woman.

This story displays the following tropes: