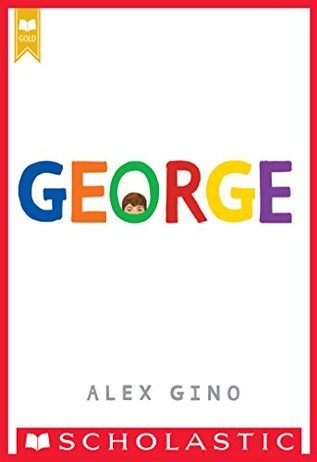 Be who you really are.
Advertisement:

George is a novel by Alex Gino, a non-binary author using they/them pronouns, first published in 2015 by Scholastic.

George, the main character, is a fourth grader who struggles with her gender identity. She was born biologically male, and is seen as a male by everyone else in her life, but she knows she is actually a girl. She likes looking at fashion magazines, but she keeps these a secret from her family, not ready to tell her older brother, Scott, or her single mother about her gender. When her teacher, Ms. Udell, encourages the children to audition for roles in the school’s production of Charlotte’s Web, George desperately wants to play Charlotte the spider, though Ms. Udell won’t let her because Ms. Udell still sees her as a boy and thinks that boys can’t play Charlotte. With the help of her best friend Kelly, George finds a way to not only play Charlotte, but also let everyone know who she really is, which is a girl named Melissa.

A companion novel, Rick, was released in 2020, centering around one of Melissa’s middle school classmates, who struggles with his sexuality.

Due to regret over deadnaming Melissa in the title, Gino now refers to the novel as Melissa's Story.

Some tropes seen in this book: