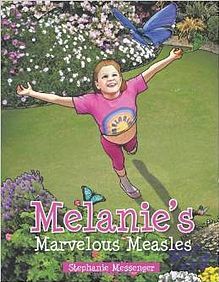 Melanie's Marvelous Measles is a controversial children's book self-published in 2012 by the Australian author Stephanie Messanger, who was inspired to write it after her son died from what she thought was the vaccine he'd recently had.

It is meant to communicate that having measles is actually a good thing and that vaccines are bad, and it portrays measles rather unrealistically by having those afflicted with it still active. It also ends with both the vaccinated children getting measles and both the unvaccinated children staying healthy. The book has also received controversy because of the title's similarity to George's Marvellous Medicine, whose author (Roald Dahl) had a daughter who died of measles.

In the book, a girl named Tina enters her class and finds that her friend Melanie has not arrived. It turns out that she has the measles. A boy named Jared says that he has been vaccinated and another boy, Travis, says that he hasn't been. Jared responds that not getting vaccinated could kill you, but is lost for words when Travis says that he's still alive. The book then reveals that Tina is also unvaccinated because her parents decided that vaccination was "too risky" after her older brother Sam became sick from a shot.

At home, Tina's mother explains what measles is, claiming that it makes you stronger in the long run and that the only reason people are afraid of it is a fear of the unknown, like being afraid of the dark. They then visit Melanie, bringing carrots and melon, and Melanie is fine and her spots don't even itch, but apparently her doctor says it's the worst case he's seen in years. They play together, Melanie recovers, and Tina doesn't get the measles but Jared does.