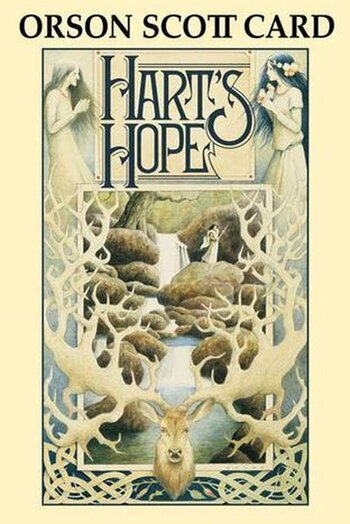 Hart's Hope is a novel written by Orson Scott Card which takes place in the medieval land of Burland. Burland is ruled by the tyrannical king Nasilee, damaged young princess named Asineth, and bloody martial law. All of the gods hate Nasilee and conspire to raise the Count Palicrovol to become king. Zymas, the king's general, allies with Palicrovol to take down Nasilee.
Advertisement:

To rule he must kill the king and marry the daughter, and to make sure that everyone knows that he is truly king, Palicrovol publicly rapes twelve-year-old Asineth. Palicrovol then gives Asineth into the care of his wizard Sleeve.

Asineth has conceived, and bears the child for a ten-month term, making the child one of great power. She uses the power of her child to bind the gods to her will and amass great power.

He then sends for his betrothed, the Flower Princess, Enziquelvinisensee Evelvenin, to marry, but Asineth now renamed herself Beauty has come back, transforms his princess into an ugly crone, Sleeve into a dwarf jester, and Zymas into an old and weak man. She takes power and banishes Palicrovol from the capital to never see his loved ones again.

Three hundred years later, Palicrovol has a vision of a peasant woman, Molly, the two of them make love and Molly has Orem. As Orem grows he wishes to travel to the capitol, Inwit also known as Hart's Hope. Inwit is a strange city with different gates and that you can only enter the part of city based on the gate you enter. Since Orem has no trade, he has only Piss Gate. He has three days to find work before he will be expelled from the City.