Literature / The Hare and the Pineapple 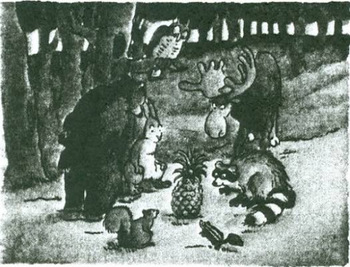 "The Hare and the Pineapple" is a short story by Daniel Pinkwater that had appeared on a New York State English exam for 8th grade students in 2012.
Advertisement:

The story involves a hare and a pineapple having a race; the actual details are a lot stranger than that, despite the story only being a few paragraphs long. It would have gone unnoticed like any test story if it weren't for the absurdity. As such, this story stirred up a lot of controversy, due to the bizarre plot and incomprehensible questions that followed. The story was modified from a story within Pinkwater's book Borgel; according to Pinkwater it was modified to be even more bizarre by the testmakers, to his chagrin.