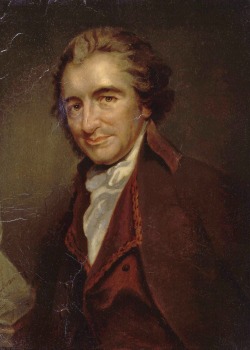 I'm T-Paine, you know me!
"We have it in our power to begin the world again."
Advertisement:

Thomas Paine (1737-1809) was an English-born Pennsylvanian citizen,note He acquired Pennsylvanian citizenship when he moved before the Revolution and, years after independence, gained citizenship of the new country that was the USA political activist, author, Enlightenment figure, propagandist, and radical. He was born the son of a corsetmaker, and died one of the most hated figures of his time. About a century after he died, he had an enormous growth in popularity and his accomplishments started to get some recognition.

on his ship "The 'Terrible'", but was stopped from doing so by his father. Death influenced Pain's writings.

In 1760, Pain's wife and first child died during childbirth, and his corset business went under. This drove a depressed Pain to drink, and he started voicing his opposition to British politics and especially the monarchy during his drunken fits. Within a few years, he had added the -e- to his name and his situation improved somewhat. Concurrently, this was the beginning of Paine's involvement in radical politics. He started writing campaign songs for politicians and writing articles in favor of reforms, such as higher pay for excise officers. After gaining a reputation in England for being a rabble-rouser and a drunkard, Benjamin Franklin, impressed by his writing skills, invited Paine to the other side of the Atlantic in 1774.

Most of you probably know him for writing the pamphlet Common Sense in 1776 during the early period of The American Revolution. Paine used very, very blunt arguments in favor not just of rebelling against Parliament in the King's name, but actually fighting for full independence. Until then even the most dedicated rebels, such as John Adams, weren't talking about independence - but Paine used beautiful speech and direct, confrontational arguments that swayed many of the richest and most powerful colonists in favor of it. The pamphlet sold hundreds of thousands of copies in just a few months (in fact, in proportion to the population of the time, it is the most circulated non-religious book in the USA's history), and it even caught the attention of many European countries' intellectuals and nobles (the two overlapped, particularly in Russia). Not so coincidentally, the colonies agreed upon a formal Declaration of Independence just a few months later. Paine also wrote a series of equally-popular papers known as The American Crisis papers, which famed rebel leader George Washington had read to all of his militia soldiers to rally them when times got tough. Paine had to write these anonymously because these actions constituted treason. Franco-Spanish military might and Dutch finance may have won the colonies their independence (albeit as a united-ish country), but they wouldn't have fought for it in the first place if it wasn't for Paine; Adams once said that "Without the pen of Paine, the sword of Washington would have been wielded in vain."

Now, here's what then happens to Paine that most history books don't mention.

Paine was named the secretary of the Congressional Committee on Foreign Affairs by the states' 'Continental Congress' in 1777. However, he started publicly releasing information proving that certain members of the Congress were using war funds to gain personal profit. In the process, he also leaked certain information to the public about just how they were getting these funds from France, so he was kicked out in 1779. Paine then served as an aid to general Nathanael Greene and raised funds to help improve conditions for the militia. Additionally, he was one of the first people to realize that the Articles of Confederation would be an ineffectual disaster, and he called on the other 'Founding Fathers' of the USA (landed, monied aristocrats and businessmen) to hold an international convention and subordinate their countries to a strong central government.

After the Revolution he turned his eyes back to Europe, moving back to Great Britain in 1787. He tried to inspire a revolution against the country's constitutional democracy, but only ended up gaining the disapproval of many of his former allies. Many historians have noted the influence of Paine's writings in this period upon strengthening the liberal cause in Britain, later allowing the passage of laws which made the country more democratic - such as the Reform Bill of 1832, which gave every MP a constituency of similar population and at one stroke eliminated the infamous 'rotten boroughs' which had plagued the system for centuries. In 1789 The French Revolution broke out across the Channel, and many intellectuals in Great Britain initially wrote passionate pieces sympathetic to the revolutionaries, but the political elite saw the events in France as an invitation for homegrown radicalism and mounted a backlash. Paine wrote his The Rights of Man in 1791 as a rebuttal to Edmund Burke's famous critique in his Reflections on the Revolution in Francenote A key text in conservative ideology that although highly critical of radicalism, managed to predict both the Terror and the rise of Napoleon.. Paine took Burke's criticism as a form of betrayal since Edmund Burke supported the American revolution but argued against the French for its far more radical and thorough democratic framework. Paine was charged with seditious libel and forced to flee England before he could be arrested and stand trial for it and was found guilty for failing to attend the trial in absentia. He never returned to England again. In France, Paine was declared an honorary citizen for his support of the French Revolution and was even elected to the French National Convention in 1792.

He served on the Constitutional Committee headed by the Girondins, the pro-war faction of the Revolution who, like Paine, advocated for war against neighboring powers to "spread the Revolution"note Ironically, despite being highly anglophile, the Girondins declared war on England. Paine didn't speak French and did not really make a great effort to learn the language which made him dependent on the English-speaking multilingual elite of the Girondins rather than the Jacobins who were populist and Parisian in base, ironically putting the famous radical (by Anglo-American standards) to a moderate position. Paine did not win himself favors when he argued against executing King Louis XVI and instead suggested he be sent to America as a noble hostage. During the Reign of Terror, Paine along with many English expats trapped in France was placed under arrest and imprisoned at the Palais de Luxembourg, and while in prison, he began to write The Age of Reason, a pamphlet that advocated Deism while also criticizing organized religion, particularly Christianity and the Bible. He had actually began work for this before his arrest and was conducting research at Saint-Denis when he was captured. This highly controversial book earned Paine a good deal of condemnation since it put forth criticism of traditional Christianity in an accessible manner for the common man and this meant that it would eventually be read by a far bigger public than other anti-religious pamphlets put forth by Voltaire and Denis Diderot, among others. He remained imprisoned for the entirety of the Terror, and was released six months after Thermidor, upon the arrival of the new American ambassador to France, future President James Monroe.

Paine continued to live in France until 1802. Despite his imprisonment during the Terror, Paine was critical of the Directory government that followed. He was especially disappointed by the post-Thermidor Constitution which reversed many of the proposals in the 1793 Constitution (finished by the Jacobins but based on the groundwork done by the Girondin Committee on which Paine had served), chiefly universal male suffrage and lack of property restrictions. He also met Napoleon during this time and discussed an invasion of England, for which he wrote a pamphlet. He wrote an infamous open letter where he declared that George Washington was the head of a wild conspiracy that was responsible for his imprisonment. He was not without his reasons: the order of his arrest, written in Maximilien Robespierre's own hand, stated that he was arrested for the interest of "America and France" which considering that then-ambassador Gouvernor Morris refused to intervene and continued to do so after Robespierre's downfall, proved in the opinion of Paine, and some historians, complicity on the part of the American government to get him guillotinednote There is a record that petitioners on Paine's behalf appealed to the revolutionary tribunals for his release on the grounds that Paine was an American citizen, which France considered their ally, but the judge in question stated that Paine was technically a British subject since he had never officially taken citizenship with the new American government. He would have qualified for asylum status but Ambassador Morris did not give him this recognition despite staying in Paris during the entire period of the Terror and Paine's imprisonment, not even helping him after Robespierre's downfall. Morris was opposed to Paine's vocal support for the Revolution because he felt it upset America's neutrality, and likewise served as an invitation and endorsement for radicalism back home. At this point, Paine's loss-of-favor with his former allies turned to outright hatred. He continued writing controversial and radical pamphlets, most notably 1795's Agrarian Justice. In this pamphlet, Paine introduced a concept that is now called "guaranteed minimum income," a sort of welfare program where all citizens and families are paid a sufficient living income. He also gave the world an early argument for providing welfare for the elderly and public education for children. Because of this, the Social Security website credits Paine as the first American to promote the idea of a welfare system. Paine's other activities during this period involved founding several deist temples and societies in France.

In 1802, President Thomas Jefferson invited him back to America. Paine, however, was widely disliked by this period, and spent his last few years living alone and with little money. In the run-up to the Louisiana Purchase, Paine wrote a letter to Jefferson strongly advocating the idea of peacefully purchasing the land from France, which helped sway Jefferson in favor of it. Only six people attended his funeral after he died in 1809. Most newspapers throughout the nation printed a line from a New York paper's obituary: "He had lived long, did some good and much harm." Over a century later, though, Paine's legacy saw a resurgence in popularity, with some people even declaring him to be the English Voltaire. Indeed, it is a fine thing to see Paine finally getting proper credit for spreading support for democratic ideals and egalitarianism in English-language culture, and for The Frogs and their wacky Revolutionary ideals to finally be seen in their contemporary international context.

Tropes that apply to Thomas Paine