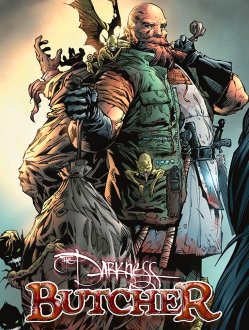 Want to make sure everyone knows exactly how bad your badass is? Or how crazy your Ax-Crazy gets? Add "The Butcher" onto his name. Butchers hack up meat all day and are always surrounded by blood and gore, so they must be violent, scary people, right? You'll certainly never see "The Baker" or "The Candlestick Maker" used this way, we guarantee.

Bonus points if "The Butcher" is a literal butcher, complete with cleaver, apron, and a penchant for hacking up victims gruesomely.

Although the nickname can sound impressive, it's almost never intended to be a compliment in real life. The title is most often slapped on Serial Killers and military leaders who are accused of war-time atrocities. "To butcher" something can also mean to do a hack job of it, so the title can sometimes be a Stealth Insult. Due to the many negative connotations of the word, it's no surprise that many butchers prefer to go by "meat cutter."

The stigma against butchery is largely unfair to professional meat cutters, who usually don't slaughter anything themselves. Their job tends to consist of chopping large hunks of meat (sometimes directly from animal carcasses) into smaller cuts of meat, with an emphasis on precise knife strokes and good presentation.

Sub-Trope of The Magnificent, and of Names to Run Away from Really Fast. Compare Red Baron.

Real Life examples who have appeared in fiction

Oleander's father manifests in his mind as a giant, monstrous Butcher.

Oleander's father manifests in his mind as a giant, monstrous Butcher.