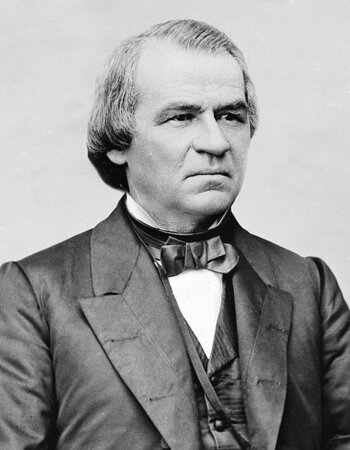 "Tyranny and despotism can be exercised by many, more rigorously, more vigorously, and more severely, than by one."
"There are some who lack confidence in the integrity and capacity of the people to govern themselves. To all who entertain such fears I will most respectfully say that I entertain none... If a man is not capable, and is not to be trusted with the government of himself, is he to be trusted with the government of others... Who, then, will govern? The answer must be, Man — for we have no angels in the shape of men, as yet, who are willing to take charge of our political affairs."
Advertisement:

Andrew Johnson (December 29, 1808 – July 31, 1875) was the seventeenth president of the United States (serving from 1865 to 1869), following Abraham Lincoln after his assassination, preceding Ulysses S. Grant, and was the sixth from the Democratic Party. Technically speaking, he was elected from the National Union Party (which replaced the Republicans during The American Civil War), but historians generally count him as a Democrat. He never went to school, so he had to teach himself how to read and write; both his parents were manual laborers who never learned how to. Johnson, born in North Carolina, moved to neighboring Tennessee as a young man and became a congressman (serving in both houses at different points), and was the only senator from a seceding state to stay with the Union. He was also the governor of Tennessee at one point, and Lincoln later made him the state's military governor during the Civil War; while holding that position he ordered slavery abolished in Tennessee in October of 1864. Johnson himself, ironically, was a former slaveowner, and the last US President to own slaves at any point in his life. Johnson freed his personal slaves on August 8, 1863, and to commemorate that event, August 8 is officially celebrated as "Emancipation Day" in Tennessee.

For the presidential election of 1864, Lincoln chose Johnson as his running mate for reelection because, as the only Southern senator left, he could broaden Lincoln's appeal in the slave states that didn't leave the Union. Johnson was expected only to help Lincoln get a few extra votes and serve a forgettable term as Vice President. Then John Wilkes Booth shot Lincoln dead. This was part of his own conspiracy to save the South as Booth ordered one of his henchmen, George Atzerodt, a German immigrant and carriage repair shop owner, and Lewis Powell (Paine) to kill Vice President Andrew Johnson and Secretary of State William Seward. At 10:15 pm, the same time Booth shot Lincoln during a production of Our American Cousin at Ford’s Theater, Atzerodt could not bring himself the courage to shoot Johnson at the Kirkwood Hotel, so he ended up getting drunk while Powell only managed to seriously disfigure Secretary Seward at his mansion, but the metal canvas splint saved Seward’s life. After being spared by his own assassination attempt by Atzerodt, Johnson became the 17th President of the United States after Lincoln passed away at the Petersen House. Three months after the assassinations of Lincoln and Booth, Johnson controversially permitted the execution of Atzerodt, Powell, David Herold, and boardinghouse keeper, Mary Surratt on July 7, 1865.

Being a Southerner himself, Johnson wasn't willing to penalize his own region too harshly. As such, he disagreed a lot with the Republican-dominated Congress, vetoing many of the Reconstruction bills (which were usually passed over his veto) and amendments (which he may or may not have vetoed given the chance, but as he didn't—constitutional amendments never pass over the president's desk—the point is moot). It didn't take long before he surpassed Andrew Jackson's record for most presidential vetoes up to that point in history, and more than a few members of his Cabinet resigned in protest. Regarding civil rights for African Americans, Johnson infamously stated, "This is a country for white men, and by God, as long as I am President, it shall be a government for white men." Eventually, Congress passed the (blatantly unconstitutional) Tenure of Office Act, which stated that the President couldn't fire any of his appointees without Congressional consent. The Radical Republicans knew Johnson would see this as a challenge to his authority, and violate it just to see what happened. He did when he fired Secretary of War Edwin M. Stanton, a Radical Republican raising havoc in Johnson's Cabinet, and tried to replace him with General Lorenzo Thomas. Congress then impeached Johnson, the first time in American history that the president was impeached. Also, they sold tickets to the trial. Like Bill Clinton and Donald Trump, each more than a century later, the House voted to impeach him, but the Senate acquitted him (and this time, only by a single vote). Johnson's lawyer pointed out that Lincoln made the appointment and, technically speaking, Johnson wouldn't have had to gain Congress' approval to fire him. Additionally, many of the senators argued that the nation had gone through enough lately and that such a major change in leadership wasn't necessary. There was also the case that, since there was no vice president (at the time, when a VP ascended to the presidency, no one was sent to replace him and so the position stayed vacant until the next election), the new president would be Benjamin Wade, the widely-disliked president pro tempore of the Senate, who was so far ahead of his time (he supported voting rights for women, legal support for unions, and putting limits on capitalism, all political no-noes back then) that many felt he would have been even worse. Some cases of bribery and offers of patronage jobs to any Republicans who were prepared to acquit Johnson have also been reported.note For what it's worth, all the Republican senators who voted against convicting Johnson either retired or were removed from office — this was back when state legislators rather than all voters in the state voted for senators — when their terms were up. Finally, Johnson only had nine months of his term left anyway, and Ulysses S. Grant, who was openly supportive of the Radicals' agenda, had been nominated as the Republican presidential candidate at the forthcoming election — which just about everybody could see he would win easily, regardless of whom the Democrats nominated — and many in the party begrudgingly concluded that it'd be less complicated for all involved just to let Johnson serve the remainder of his term rather than deal with a short-lived Wade presidency.note Wade had also been passed over for the position of Grant's running mate, and many in the party were worried that if he became president following Johnson's removal, he might seek to hang on to the office as a third-party candidate.

Johnson was allowed to complete his inherited term, but as a result, he was largely powerless and Congress essentially had more power than the president for the next few decades of American history (in his pre-political academic career, future President Woodrow Wilson notably argued that Johnson's impeachment was what touched off what he called "Congressional Government"). Following his acquittal, Johnson tried to get nominated as the Democratic candidate for the 1868 election, but failed miserably, and as one final insult, Grant refused to share a carriage with him during his inauguration, causing Johnson to snub the event altogether. He would be the last outgoing president not to attend his successor's inauguration until Wilson skipped Warren G. Harding's inauguration in 1921, as a result of Wilson’s strokes.

In 1887, Congress repealed the Tenure of Office Act, and subsequent rulings by the Supreme Court of the United States seemed to support Johnson's position that he was permitted to fire Stanton without congressional approval. The Supreme Court's ruling on a similar piece of later legislation in Myers v. United States (1926) affirmed that the President could remove a postmaster without congressional approval, and stated in its majority opinion "that the Tenure of Office Act of 1867... was invalid." (Fun fact: President turned Chief Justice William Howard Taft was the man who gave the majority opinion on that one.)

Other notable actions while in office were forcing France to get out of Mexico (which is why Americans celebrate Cinco de Mayo and Mexicans basically ignore it) and signing Secretary of State William H. Seward's purchase of Alaska from Russia in 1867. The $7.2 million purchase, nicknamed "Seward's Folly", was considered a waste of money by a Vocal Minority at the time, though the discovery of gold and, later, oil in Alaska disproved this. He vetoed adding Nebraska to the Union, but Congress overrode this. For (arguably) helping to delay the guarantee of equal civil rights for black Americans for nearly a century, mishandeling Reconstruction, and giving the South too much power, and the scandal of his impeachment, he is generally considered to be one of the worst presidents, though some could also easily argue it wasn't entirely his fault while others say that he was just too authoritartive. He was reelected as a senator from Tennessee in 1875, and died less than five months later.

Red Cloud's War, regarded as the most successful of the Indian Wars for the Native American tribes fighting against the government, was fought during his presidency.