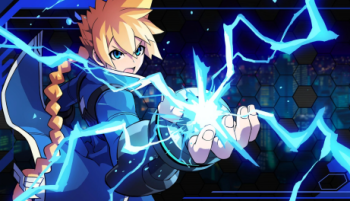 You will pay the price for your lack of vision.
"There's nothin' like a fistful o' lightnin', now is there?"
— Atlas, BioShock
Advertisement:

The use of lightning, huge electrical discharges, and stuff resembling them as a weapon to fry things with. This is one of the most common Elemental Powers and is part of the basic Fire, Ice, Lightning trio. It's also one of the handiest ones around; used for anything and everything that the writers can think of. For why this doesn't work in Real Life, see the analysis page.

Wielders of this power set have an odd tendency to be insane, hyperactive, have blond hair, be African-American, or some combination of the above. Also not unheard of for the Lightning Bruiser, though that "lightning" is usually a reference to speed.

Related to Blinded by the Light and Ride the Lightning. Someone with this power may be a Technopath or Fast as Lightning as well. Compare Magnetism Manipulation which (sometimes) includes electromagnetism. See God of Thunder, Electric Jellyfish, Thunder Beetle and Thunderbird for animals often associated with this power. Contrast An Ice Person, Playing with Fire, and Weather Manipulation for weather controllers who use lightning among other attacks. For other uses of lightning and electricity, see Magical Defibrillator and Electric Torture. For the physics (or lack thereof) behind electrical attacks or weapons, see Chain Lightning, Lightning Gun, Static Stun Gun and Shock Stick. Combine with Whip It Good and you've got a Lightning Lash.

Has nothing to do with the United States military rapid dominance doctrine,

though that's where the name comes from.