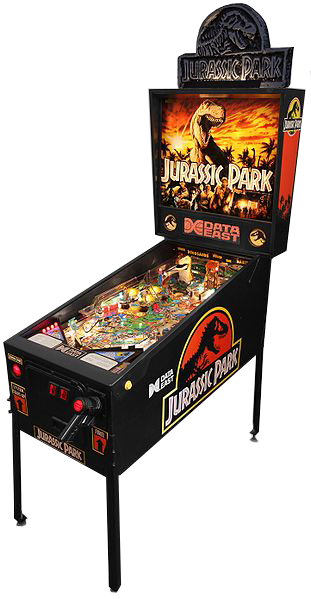 If it's not Jurassic Park, it's Extinct!
A Pinball Adventure 65 Million Years in the Making.
Advertisement:

Jurassic Park is a 1993 pinball machine by Data East and John Borg, based on the hit film of the same name.

It follows the movie rather closely, showing the park's opening and its subsequent fall to the dinosaurs, with several separate modes recreating specific scenes, before the Wizard Mode, "System Failure", recreates the most famous moment of all: the park's power failing and the dinosaurs escaping and wreaking havoc.

The game's main attraction is a toy T-Rex head that follows the ball, and if it lands in its designated saucer the T-Rex bends down to snatch it in its mouth, accompanied by a sound clip of a man panicking and screaming "No!"

It had a sequel, The Lost World: Jurassic Park, released in 1997 by Sega Pinball (which had acquired Data East's pinball assets). In addition, Stern released another pinball machine based on the original film in 2019.

This pinball demonstrate the following tropes:

Hammond: "How about another tour of the park?"