Film / Lady for a Day 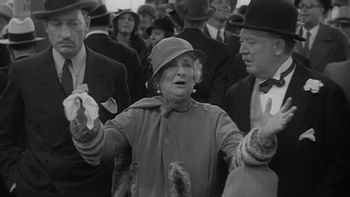 Lady for a Day is an Academy Award nominated film from 1933, directed by Frank Capra, based on the short story "Madame La Gimp" by Damon Runyon.

The film is about a poor woman called "Apple Annie", who sent her daughter, Louise, abroad, and sends most of the money she makes (both by selling apples or hustling) to help her daughter grow up well off. She also made her daughter think she was well-born and that Annie is living an upper class lifestyle.

But then her daughter is engaged to a Spanish count, who wishes to meet her. The truth would ruin the match and humiliate everyone. Fortunately, a mobster, Dave the Dude, has been buying her apples for years, as a good luck charm. He agrees to help her out in return, with the help of his girlfriend, Missouri Martin. Unfortunately, maintaining the charade is not so simple.

Capra remade it in 1961 under the title Pocketful of Miracles, starring Bette Davis.

In 1989, Jackie Chan directed and starred in a version set in 1930s Hong Kong, called Miracles (also known as Mr. Canton and Lady Rose or Black Dragon). This version is based most closely on Pocketful of Miracles.

In 2008, Akshay Kumar starred in Singh is Kinng, using the same basic story.

Story and films provide examples of: