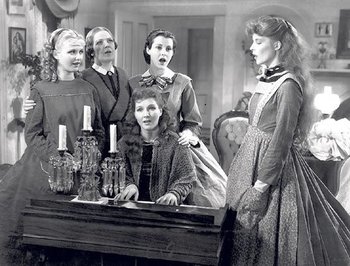 Little Women is a 1933 film directed by George Cukor.

It is one of many, many adaptations of Louisa May Alcott's School Study Media novel, Little Women. The time setting is The American Civil War and after. The story centers on the March family of Concord, Massachusetts. As the film opens, man of the house Mr. March is off fighting in the war, leaving his wife "Marmee" March to look after their four daughters. Their daughters are:

The family tries to make ends meet while worrying about Mr. March off in the war. Their neighbor Mr. Laurence welcomes home his grandson Laurie, who soon falls for Jo. Jo finds herself having to resolve her feelings for Laurie and how they conflict with her hope for a career. Meanwhile, Beth falls ill.