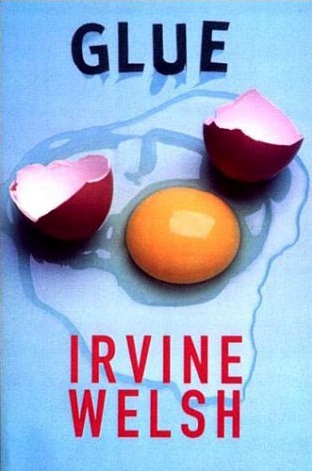 Glue is the fourth novel by Irvine Welsh, published in 2001, concerning friendship, drugs, sex and getting by in a working class neighbourhood of Edinburgh. It charts the development and camaraderie of four ragtag lads at the beginning of four consecutive decades each; 1970 through to the Turn of the Millennium.

They are Billy Birrell, honourable if easily-provoked street smart champion boxer; Terry "Juice" Lawson, easygoing sex-crazed layabout; Andrew "Gally" Galloway, Troubled, but Cute heroin addict who is estranged from his family; and Carl "N-Sign" Ewart, chemical DJ prodigy who supports Hearts, much to the dislike of his three Hibee mates. We follow them through childhood upheavals, small time theft, casual battles with Scotland's teams, drug experimentation, holidays to Europe, struggles with the local scheme gangsters and the all-important pursuit of women so as "to get their hole" and perhaps more besides. The long reaching consequences of our actions and the permanent, devastating effects they have are explored from the outset.

Switching between the four protagonist's viewpoints and those of supporting characters, the novel features many of the stylistic and tonal devices employed by Welsh in Trainspotting. The accents are thick, the tone is claret black and the cynicism can be infectious. But counterpointing the despair are frequent moments of levity and optimism. Catharsis and redemption is the concluding theme. Carl's father provides ten fundamental guidelines for surviving in the scheme, which prove to be the novel's Arc Words.

Glue features the Trainspotting crew rather more frequently than some of the other works in Welsh's Shared Universe, for example a comedic meeting with Spud during a house break-in. In turn, the former's sequel Porno features Terry in a prominent role, along with Billy's brother Rab. Several other characters make cameo appearances. If the Skagboys can be considered Welsh's A team, the Glue gang are the B team; on the periphery of the former and with mutual friends. The Glue lads received a short story in the Reheated Cabbage anthology several years later. Terry is also the protagonist of Welsh's latest novel A Decent Ride, which also features several characters from Trainspotting, Glue and Filth, such as Sick Boy, Billy Birrell and Clifford Blades. Later, in The Blade Artist and Dead Men's Trouers, Terry makes several appearances in his capacity as a cab driver and pal of Sick Boy's, and Carl is now a washed-up DJ under the management of Renton.