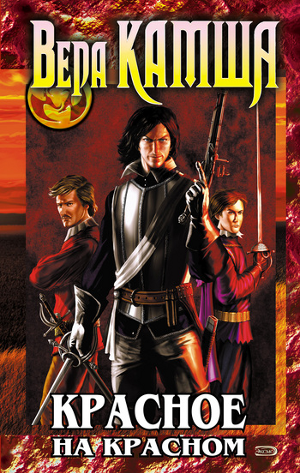 Gleams of Aeterna (Отблески Этерны) is a series of Low Fantasy novels by the Russian writer Vera Kamsha (author of the Arcia Chronicles) set in the Constructed World of Quertiana. Thousands of years ago, Quertiana was brought into being by four creator deities, who have since disappeared, but their descendants founded the four Great Ducal Houses that ruled over the lands in their stead. At some point, the Rakan dynasty united all lands under their rule into the Golden Anaxia... but that time is long past, too. Time in the Golden Lands is measured in 400 year-long ages, each associated with one of the four elements. The last turn of the age saw a charismatic rebel named Francis Ollar overthrow the last Rakan emperor and found his own kingdom, Talig. Now, 400 years later, the end of the current age once again beckons a time of strife and political crises... and there are strong indications that the literal end of the world is just around the corner.

The series is epic in scope and switches between multiple POV characters often. The primary narrators from book one onwards are Richard Oakdell, the young heir to the House of the Rocks, which fell from grace when Richard's father led a failed uprising against the Ollar dynasty a few years ago; Robert Epine, the heir to the House of the Lightning, who was exiled from Talig for his part in the same uprising and has since cast his lot with Aldo, the last heir of the Rakan family; and Mathilda Rakan, Aldo's grandmother. The main Non-P.O.V. Protagonist of the series is Roque Alva, current head of the House of the Wind and the First Marshal of Talig, who personally dueled and killed Richard's father, ending his rebellion. They are later joined by a number of narrators, such as the dashing schemer Marcel Valmont, the unlucky Old Soldier Carlo Capras from Guyifa, the upstanding Drixen mariner Rupert vok Felsenburg, and the Savignac twins — both marshals of Talig.

Fifteen books have been published, with the final volume getting repeatedly stuck in limbo, Divided for Publication, and published piecemeal since about 2010note most notably, Sunrise had mysteriously disappeared right from the printing press in 2013 before reemerging, largely revised, in 2017. The author also has plans to release a collection of previously published and new novellas set in Aeterna and Quertiana in a single bound volume titled Flame of Aeterna. A full (spoiler-y) list of published volumes can be found on the recap page.

). Word of God is that audio books, a Comic-Book Adaptation, and even a Licensed Game based in the multiverse of Aeterna are also being produced.