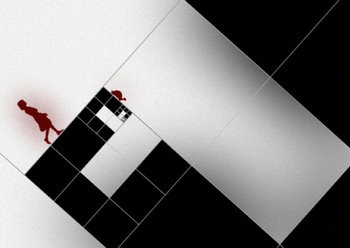 The plots of some serial works can often take as much time getting to the three-quarter mark as they did getting to the half-way mark. And then as much time again on the next eighth. And so on. This phenomenon is known as Exponential Plot Delay, and it is a common trend among particularly long-running works.

The main storyline advances initially, but soon slows down until it all but comes to a halt. The rate at which Plot Coupons are collected drops dramatically, until it reaches a point where, for the A-story, Status Quo Is God. This can follow from the writer's understandable desire to avoid resolving the overarching plotline — the one that is providing the core tension sustaining the work. Other times, it's because the work has become popular enough to become a Cash-Cow Franchise and either the writer or their management doesn't want the story to end — a lack of progress sometimes translates into good business.

There are several ways to make this work. First and foremost are sub-plots. And sub-sub-plots, etc. The advantage is twofold: sub-plots take the weight off the main plot and they provide an opportunity for storytelling in their own right. For maximum effect this trope is combined with multiple Plot Threads, advancing each sub-plot in turn. If too many threads are left unresolved, however, a Kudzu Plot may develop.

Another way to keep the A-story stable is the repeated discovery of The Man Behind the Man, often coupled with the Sorting Algorithm of Evil. As The Hero triumphs over a foe, he repeatedly finds out about an even worse foe out to get him. If all else fails, the writers can resort to filler. note Use of the Reset Button is another technique, but not covered by this trope.

A measure of caution must be taken when employing this trope, however. As the plot slows down, Arc Fatigue may make itself felt, and if it's done particularly badly, it may well lead to the audience giving up on the work, especially if years go by without the characters making any kind of meaningful progress in the main plot and it's determined that any attempt by the characters to make progress will meet with failure.

All series must end eventually, one way or the other. Sadly, some series are Cut Short; Real Life Writes the Plot and it's Left Hanging because of money problems and/or Died During Production. Sometimes a series is not profitable enough to continue, but a short work is made to Wrap It Up. Other series end more naturally; the A-plot is taken out of the freezer, lightly microwaved with some lead-up and given a satisfying resolution.