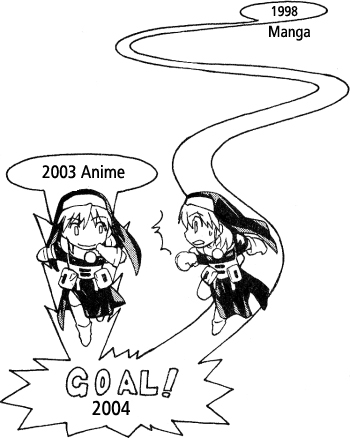 "How'd you get here so fast, Anime-san?"
Mokuba: We appear to be locked on course with a giant ocean fortress directly beneath us!
Yugi: That's weird. I don't remember any of this happening in the manga.
— Yu-Gi-Oh! The Abridged Series
Advertisement:

Many anime are based on manga, or Japanese comics. While simply making the anime into a completely Alternate Continuity is common (especially if the manga has No Ending), more often the anime at least tries to follow the major plot points of the original manga.

However, if a series is especially popular (and/or marketable), its anime version will begin before the manga even ends. Because of medium conventions, it takes longer for events to unfold in manga than it does in anime — the average conversion being roughly 2 (weekly) manga chapters to make 1 anime episode — and this often means that before long an anime will simply run out of source material. While some manga series are published weekly (e.g., Shonen Magazine/Sunday/Jump, etc), others are published on a monthly schedule (e.g., Magazine/Nakayoshi, Shonen Ace). However, most anime are aired weekly, which only makes it worse, especially for manga that have just started recently. The producers of the anime are then in a fix: they can't just wait for the creator to produce more material because they have a broadcast schedule to meet. Japanese shows are almost always broadcast solely as original episodes without re-runs, so no new episodes is akin to being cancelled. This is something that is frequently lost in translation outside of Japan, with the result being that, unlike Western shows, television shows aren't really made in the form of "seasons", with breaks written into the production schedule. They just keep going and going and going until they finish/get cancelled, or stop at a predesignated point. This is also why lots of anime are only 12/13 or 24/26 episodes long, because that's all they were scheduled for, regardless of popularity. However, there are shows that are starting to break this tradition by adopting the "seasons" model, such as My Hero Academia.

Unless they work in close tandem with the writer of the original manga – which is very rare since those writers are usually busy with the manga as is – the people in charge of the anime will have to come up with their own solution for this problem. The most common being that they just start making things up on their own, and create a unique plotline continuing from the point they caught up with the manga to base things on.

Unfortunately, unpopular or unwelcome filler arcs and episodes may often be Misblamed as being the fault of the original creators, when in reality the creators almost always have nothing to do with the filler plot. Some fillers that were better received by fans are often cited as being opportunities to develop lesser characters (this helps a lot with anime that have a cast size near the size of the production staff).

Another popular option is to just pad the episodes out and slow the story down. This was common in the Dragon Ball series, which unfortunately meant that many people thought the manga was exactly the same or that Akira Toriyama's writing was at fault, when in reality the pace of the anime was out of his hands.

Finally, the writers can choose to just diverge from the manga entirely and do a Gecko Ending instead. An example of this is the 2003 adaptation of Fullmetal Alchemist, which was actually produced with this in mind due to the mangaka knowing that this trope was inevitable and feeling the other two options would ruin the story