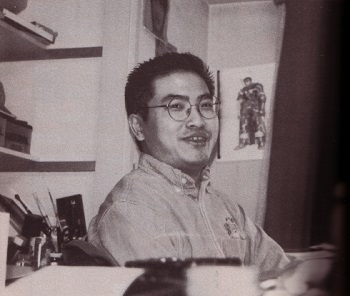 Miura, looking more or less how one would expect the guy who came up with Rape Horse to look.
Advertisement:

Kentaro Miura (三浦 建太郎 Miura Kentarō, July 11, 1966–May 6, 2021) was a Japanese mangaka born in Chiba City, Chiba Prefecture. His parents met each other and got married while they were students at Musashino Arts School: his father did storyboards for commercials, and his mother taught an art class. He credits the artistic environment he was raised in for inspiring him to draw.

His first manga, Miuranger, was created and published for his classmates in a school publication in 1976 when he was 10 years old. His second manga, Ken E No Michi (The Way to the Sword) was the first time that Miura would use India ink, and when he went to middle school, his drawing technique would improve greatly as he started using professional drawing techniques, with a doujin being produced with the help of his friends in 1982. It was in high school that he got serious about becoming a manga artist, and he was close friends with fellow aspiring mangaka Kouji Mori, who would go on to write Holyland and Suicide Island. When Miura was 18, he briefly worked as an assistant to Jyoji Morikawa of Hajime no Ippo; Morikawa quickly noticed Miura's talent and released him, saying the boy needed no further teaching from him.

In 1985, Miura created and submitted another manga called Futanabi for the entrance exam of an art college at Nihon University, which not only got him his admission into the college, but got him a nomination for Best New Author work in Weekly Shonen Magazine. Miura would publish another manga called Noa for Weekly Shonen Magazine that same year. Due to a disagreement with one of the editors, Noa was stalled and eventually dropped, which marked the point where Miura's career would hit a slump.

In 1988, three years after Noa, Miura created the foundation for what people would know him for in Berserk Prototype, which would win him a prize from the Comi Manga School. The story had Guts, who would soon become the main protagonist of the series, as a less cold character with an eyepatch (which he gives up before the prototype's end) who had elements of a Deadpan Snarker and took up Demon Slaying after his mother was killed by one. The Big Bad was to be a single demon lord by the name of Vana (instead of the five archdemons known as the Godhand that take up the role in the series proper). Lastly, the prototype was intended to be a Shōnen story, but it was changed to its now-familiar Seinen form likely because the story was still too dark.

After receiving his doctorate degree in 1989, he entered into a collaboration with Yoshiyuki Okamura, better known as Buronson, for a manga by the name of Ouro (The King of Wolves), with Buronson providing the script and Miura providing the art. 1990 saw the publication of Ouro Den (Legend of the Wolf King), the sequel to this manga. In 1992, Miura would do one last collaboration with Buronson, creating the manga Japan, again with Miura providing the art to Buronson's story.

The first volume of Berserk was published in 1990 (by the then-24 year old Miura), though it met with little success, and the magazine it was serialized in was in the process of going under. The series would not really take off until it was serialized in Young Animal magazine in 1992, during the story's famous Golden Age arc. Miura's epic tale of friendship, romance, betrayal, horror, vengeance, and supreme demon asskicking continued until his death, reaching an eventual length of 41 volumes and having over 50 million volumes in circulation. Over time it's been adapted into the anime Berserk (1997), the 1999 Dramcast game Sword of the Berserk: Guts' Rage), the PS2 game Berserk: Millennium Falcon Hen Seima Senki no Shō, the 2012-13 anime film trilogy Berserk: The Golden Age Arc, the sequel anime Berserk (2016), and the 2016 video game Berserk and the Band of the Hawk. In 2002 he received second place in the Osamu Tezuka Cultural Prize of Excellence for Berserk.

Miura was left-handed, and did most of his art with traditional techniques such as the g-pen, Maru pen, and brushes. For his color illustrations, there was wild speculation about how he did them; in fact, he used good old colouring pencils and watercolors. Since the 90s, he had 3-4 assistants helping him. His last group called Studio Gaga consisted of about four or five assistants, who came and went every couple of years. One of them, Mitsuhisa Kuji (Wolfsmund), became a mangaka in her own right. Miura kept vampire hours, and put in 16 hour workdays with no breaks or holidays while working on a deadline. Fans speculated about the cause of his increasingly frequent hiatuses, which made the pace of new releases slow to a crawl, but the reasons remain not entirely clear. One factor seems to have been him reaching middle age, which made it difficult for him to push himself as hard as he used to. In 2016, fans started to speculate about whether Miura had switched to digital painting techniques; his switch to using a tablet and computers for all his art was confirmed in the Berserk Official Guidebook.

Miura's primary influences came from works in various media, with his primary inspiration being Kaoru Kurimoto's long-running Guin Saga fantasy series. He took additional influence from Go Nagai's two darkest and most violent mangas, Devilman and Violence Jack. Miura's style was at times quite beautiful and emotional, but at other times, he came up with and drew some truly messed up and frightening shit.

While Berserk had long been his all-consuming project, Miura also created Kamui Gakupo—a Vocaloid whose design is based on Japanese Visual Kei artist Gackt—and in 2013 he took a break to write his first new manga in 24 years, Gigantomakhia.

He was also a fan of Nico Nico Douga and The iDOLM@STER, though contrary to a popular rumor he played other games besides Idolmaster and was not obsessed to the point of neglecting his work.

Along with his creative work, Miura was also a Judo black belt and former school competitor.

Sadly, Miura passed away on May 6, 2021, due to an acute aortic dissection. This left Berserk incomplete and facing an uncertain future. The September 10 issue of Young Animal magazine featured Episode 364, completed by Miura's assistants from the last manuscript he was working on when he died. The chapter was followed by an official statement from the Editorial Department of YA magazine, saying there was unfortunately no information to share about the future of Berserk at that date.

On June 7, 2022, after a long silence, Young Animal finally announced that Berserk would indeed resume serialization and be properly completed. Lifelong colleague and friend Kouji Mori has taken over as "director", while Miura's assistants continue to produce the artwork.

Media that Miura credited as inspiration:

"He died doing what he wanted, no matter what, right? I bet he was happy..."