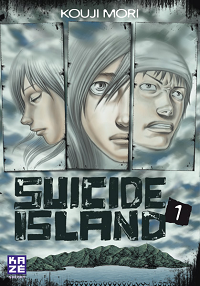 If you wish to die, you will find yourself on this island
Advertisement:

Suicide Island (自殺島 , Jisatsutou) is a seinen manga by Mori Kouji that ran in Young Animal magazine from November 2008 to August 2016, with 17 volumes published. Although somewhat obscure in the West, it's circulation in Japan was 1.5 million copies in October 2012.

Lately, Japan has been suffering from a surge in suicide attempts. Taking care of suicidal patients costs a lot of money, money that the government is not quite willing to spend on them anymore. So when a suicidal patient comes into the hospital bleeding, gagged or high on drugs, they ask a question: Do you really wish to die? If the patient answers yes, a waiver will be signed and everything will go peacefully black...

Only for the patient to awaken in an unknown place! A sign nearby explains their confusion. Since the patient does not wish to continue living, they have been legally declared dead to the government and have been sent to this Island, with everyone having washed their hands of them. Instead of the assisted suicide they were expecting, they have been flung away like garbage, into a corner that nobody cares about.

Of course, the government tells them that anything is allowed on this Island and there are no rules... except one: Do not even think of escaping. Escape is the only prohibition. Everything else is free to go, including ending your life or... assisting others in getting rid of their life.

The story itself starts off when Sei, a young teenager, ends up sent to the Island after another attempted suicide through drug-overdose along with other suicidees. They try to figure out what is going on, how this island is shaped and even begin to simply plan their lives here...

Note: Due to the subject matter, this manga is not for the faint of the heart and you can expect to see almost every suicide trope on the list. Viewer discretion is advised.

See Holyland for the author's other manga.