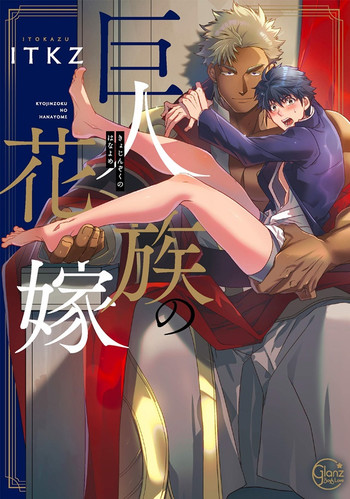 The Titan's Bride (巨人族の花嫁, Kyojinzoku no Hanayome) is an Isekai-Boys' Love manga written and illustrated by artist ITKZ. The manga began serialization in Screamo in 2019.

It centers around the relationship between Ordinary Highschool Student Kōichi Mizuki and the giant prince Caius Lao Vistaille, who has summoned Kōichi to his world to be his bride and bear his children.

As future ruler of Tildant, it was Caius's duty to wed a fertile bride and provide the kingdom with an heir. However, when an oracle prophesied that great misfortune would befall the country if Caius ever were to marry a resident of his world, his original marriage was cancelled. Caius searched day and night for an old ritual that would allow him to summon a being from another world to be his bride, so he could have both the throne and his love.

On March 18, 2020, it was announced that the series would be adopted into a television anime by Studio Hōkiboshi and Comet Company. The first trailer

was released on June 19, 2020, with the anime premiering on July 5, 2020. A censored version of the anime, cutting out all the sexually-explicit content, was broadcast on Tokyo MX, Youtube and NicoNico, while a non-censored version can be watched on the digital distribution platform ComicFesta Anime.

The Titan's Bride provides examples of: