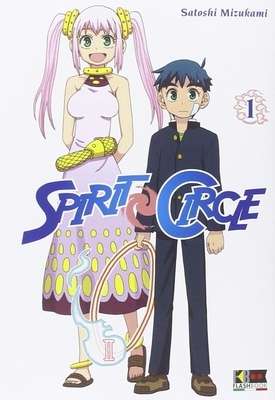 "Don't cry, me. Nothing sad has happened."
Advertisement:

Fuuta Okeya is an Ordinary High-School Student, except with the ability to See Dead People. His life is disrupted by the arrival of a Mysterious Transfer Student, Kouko Ishigami. Accompanying her is a mysterious ghostly man.

When Fuuta interacts with the man, he accidentally reveals his ability to Kouko, who seems to recognize it, and him, immediately. She then strikes him with a strange object called a Spirit Circle. Fuuta is propelled into a vision of a tragic past life. While there, he sees a past version of her as well.

When he awakens, Kouko informs him that she intends to have him die seven more times— six more times from reliving his past lives, then, once he understands, she will kill him herself.

Spirit Circle is a seven volume series by Satoshi Mizukami, who's also known for The Lucifer and Biscuit Hammer and Sengoku Youko. The manga was originally serialized in the monthly seinen anthology Young King OURS from 2012 to 2016.

Readable online in the USA via Crunchyroll here

. Published in paperback in North America by Seven Seas Entertainment, with the first volume released in October 2017.