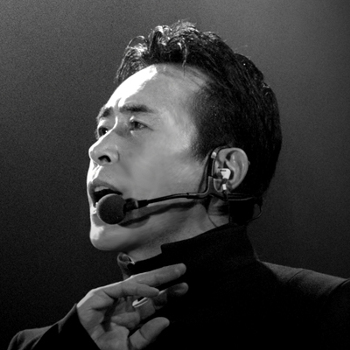 This picture shows the entire range of his public facial expressiveness.
Advertisement:

Susumu Hirasawa was born on April 2nd, 1954, in Tokyo, Japan, and since then has gone on to become one of the premier composers and performers of the dubious genre of Technopop. His musical style is indescribable, and his distinctive voice is instantly recognisable. He has composed for anime by Satoshi Kon, including Paranoia Agent and Paprika, among other things.

In 1973, Susumu started a Progressive Rock band called Mandrake. While obscure, the band was a pioneer of the genre in Japan, and his unique composition style can be heard even back then. When the band split up, he took 3 of his former bandmates and created a New Wave band, P-Model. Their first album, In A Model Room, was released in 1979, and it and its single "Art Mania" had a punkish, energetic sound that made the band quite popular. If you need a comparison, think Polysics. After their second album, Landsale, P-Model began to become Darker and Edgier, releasing Potpourri, consisting mostly of Sound Collage -type song construction, bright guitar riffs, and Susumu screaming his head off. This didn't last for long, however, and their sound evolved over the next few albums, keeping the bright riffs, using way more synth, and introducing Susumu's more well-known singing style. The album Karkador is generally the point where P-Model started sounding like themselves.

The band had been changing members about every album, and the only original member left at this point was Susumu. The album One Pattern was created in a cloud of bad inter-band relations, and has since become Susumu's least favorite album as a result. P-Model became dormant at this time, and Susumu released his first solo album, Water In Time and Space.

After two more albums on Hirasawa's own, P-Model came together once again and released a self-titled album, in which they changed genres to a more conventional techno sound, in contrast to Susumu's stranger solo material. During this period, both P-Model and solo albums were being made. In 1995, P-Model's Fune and Susumu's Sim City were released, widely considered to be their best albums, respectively. Fune involved being on a journey, and Sim City centered around a Science Fiction story set in Thailand.

In 1997, Susumu composed some music for the anime Berserk, including Forces,

which is likely one of his best known songs outside of Japan, and P-Model's sound grew even harder to pinpoint as 2 EPs and an album Enola were completed. As you would expect, P-Model had fallen out of the mainstream a while ago. Susumu focused on his solo work more, and after 1999's album P-Model Or Die, P-Model offically disbanded.

Susumu continues to make fantastic albums and soundtracks, and in 2010 celebrated the 30th anniversary of P-Model and the 20th anniversary of his solo career with remix albums of his past songs in a more orchestral style.