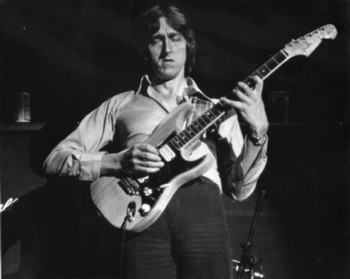 Allan Holdsworth (6 August 1946 – 15 April 2017) was a British guitar player and jazz fusion musician. Easily one of the first players to break out of the box of traditional guitar technique, Holdsworth had a very progressive sound, and could be identified by his eccentric legato playing and his complex chordal melodies.
Advertisement:

Holdsworth was born into a musical family, and wanted to be a horn player as a kid. Unfortunately for him, his uncle bought him a guitar. Unenthusiastic at first, Holdsworth toyed around on the guitar, trying his utmost to make it not sound like a guitar. It worked, and Holdsworth quickly found his technique growing at an alarming rate. Saxophone player John Coltrane was one of his biggest influences, and Holdsworth's "outside" legato playing can be attributed to his emulation of saxophone players.

Holdsworth was a pioneer of melodic guitar playing, and has influenced such successes in the genre as Steve Vai, Joe Satriani, Van Halen, and John Petrucci.