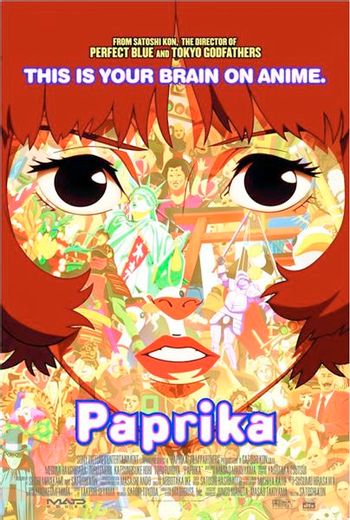 Any questions?
"No more anger, our world is happy and mundane!"
Advertisement:

Paprika started out as a book written by Yasutaka Tsutsui, its chapters serialized between 1991 and 1993. It was later adapted into a 2006 anime film by Satoshi Kon, director of Perfect Blue, Tokyo Godfathers, Millennium Actress, and Paranoia Agent. This article mainly covers the latter.

20 Minutes into the Future, scientists have created a device called the "DC" that allows people to go into other people's dreams and record them. One of these people is the titular Paprika, a colorful and perky young dream therapist. She's the dream avatar of Dr. Atsuko Chiba (voiced by Megumi Hayashibara), one of the scientists involved in the creation of the DC. Things start to go wrong when prototypes of the DC-Mini, a portable version of the DC machine, go missing; the prototypes are missing a vital piece of programming which, basically, protects DC-Mini users' minds from being hacked.

Things get even more dangerous when it's discovered that the thieves are using the megalomaniacal dream of an insane person as a Weapon of Mass Destruction. People who used the DC machines frequently in the past, such as Chiba, are at risk for being "infected" by the mad dream, and it's up to Chiba/Paprika, the DC's naive yet brilliant creator Kosaku Tokita (Toru Furuya), and stressed-out detective Toshimi Konakawa (Akio Ōtsuka) to save the day before reality gets invaded by the unstable Dream Land. The result is a beautiful, intelligent and often quite light-hearted film (though there are some heavy adult themes as well), with a very, very high "Holy Shit!" Quotient.

But what about the rest of it?
Feedback

The Parade in Paprika is a dream that induces madness in whoever gets it inspired by the Hyakki Yagyo, right down to invading the real world.

Example of:
Night Parade of One Hundred Demons

The Parade in Paprika is a dream that induces madness in whoever gets it inspired by the Hyakki Yagyo, right down to invading the real world.