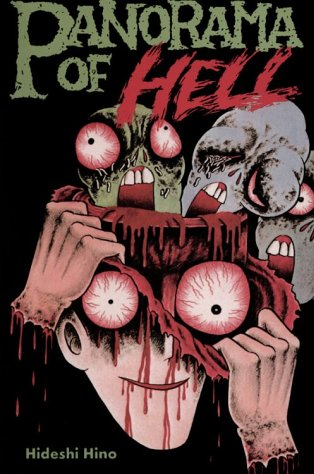 Only slightly more macabre than the actual content.
Panorama of Hell (Jigokuhen) is a 1984 one-shot by famed horror manga author Hideshi Hino. It was published in the US by Blast Corps and in France by IMHO Éditions and is very hard to find nowadays.
Advertisement:

The manga is narrated directly to the audience by its main character, a Mad Artist who uses his own blood to paint his terrifying pictures. While he's about to complete his final masterpiece depicting The End of the World as We Know It, he starts to narrate the story of his family all the way from his grandfather to his conception near the end of World War II, his abusive childhood and so on, up to a final twist...

The manga contains some autobiographical elements and was written during a bout of depression in Hino's life, so expect a very bleak general tone and not just random horror and Squick.