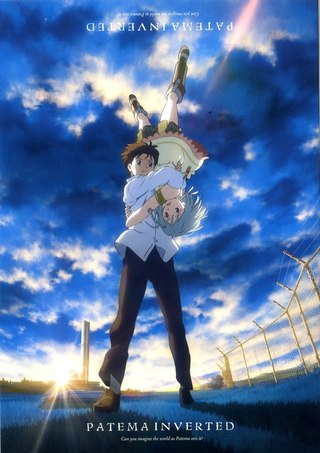 Patema Inverted (Sakasama no Patema) was originally a four-episode OVA series by Yasuhiro Yoshiura, the same man who directed Time of Eve, which was adapted into a film in 2013.

In a dark, cramped, underground world of endless tunnels and shafts, people wear protective suits and live out their modest, hard, and yet happy lives. The princess of the underground community, Patema, goes out exploring as always, inspired by her curiosity of the unknown depths of the world. Her favorite spot is the "danger zone", an area forbidden by the "rule" of the community that houses an impossibly deep pit. Despite being frequently chastised by her caretaker Jii, she cannot hold back her curiosity for the reason behind the rule, because no one would tell her what the "danger" was. When she approaches the hidden "secret", the story begins.

When Patema falls into the pit inside of the danger zone, she finds that she falls into a world nothing like her own, where the sky is not a roof, but a boundless sea of blue. Not only that, if Patema is not careful, she can fall off of the planet and into the stratosphere. However, by working together with a young boy named Age from this strange "surface world," not only does she learn how to survive, she learns that together, they can fly!

However, things become even further complicated later on, as Patema and Age soon discover a dark conspiracy, the members of which are determined to return Patema to the underground and silence all those who know of her home.

Since the last Porta saw of Patema and Age, was them falling into the sky, everybody assumed they were dead. Cue their return.

Example of:
Attending Your Own Funeral

Since the last Porta saw of Patema and Age, was them falling into the sky, everybody assumed they were dead. Cue their return.