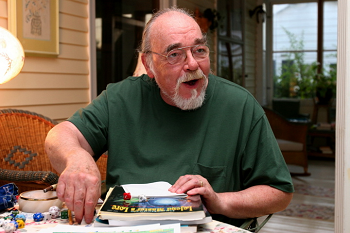 Roll 1d20 against your save to determine if you cry, and if so, how much.
"Greetings! It's a— [rolls two dice, one with 20 sides and one with 6] pleasure to meet you!"
— Gary Gygax (voicing himself), Futurama, "Anthology of Interest"
Advertisement:

Ah, good old Ernest Gary Gygax (July 27, 1938 — March 4, 2008). Where would we be without thee? Probably somewhere else, given the sheer number of different forms of media (and with them, a very large number of tropes) that originated from his work.

Back in the day, there were no Role-Playing Games. None. Only tabletop war games. Gygax (yes, despite sounding like the name of someone's own PC, that was his actual last name) didn't like that at all, so he asked his friend Dave Arneson to make one. Arneson rewrote all of the rules to Chainmail, a system that Gygax and the local shop owner Jeff Perren had developed, to create Blackmoor, the first tabletop RPG. Gygax then, along with Arneson, worked to expand this from a simple add-on to Chainmail to its own system entirely. And thus, Dungeons & Dragons was born.

TSR Inc. flourished off of the game, leading to multiple game modules, many alternate universes (Greyhawk, Planescape, Dark Sun, Forgotten Realms, Dragonlance, Eberron...), eventually even a cartoon adaptation and a few movies. However, eventually TSR fell under new management, causing him to leave the company. He continued to work on new tabletop RPGs and write novels afterwards, and remained affiliated with his original creation all his life. In March of 2008, Gygax died at the age of 69, and gamers the world over lost their saving throw against mourning.

Depending on who you ask, Gygax may be considered to be one of four things:

Media in which Gygax appears in some form or another includes: