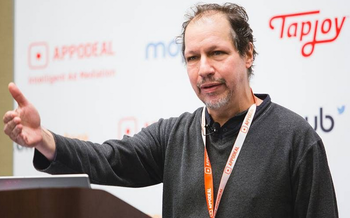 Greg has often taken the role of "bitter veteran" in the video game industry, decrying the stifling model of mainstream publishing and being one of the early advocates of the Indie Game scene. In September 2005, he joined with Johnny Wilson, former editor of Computer Gaming World, to create the startup indie game publisher Manifesto Games. As a digital distribution hub it was ahead of its time but it would be eclipsed by institutions such as Steam and the Humble Bundle, and the site eventually went out of business. Manifesto was for a time survived by the blog Play This Thing!

, an indie review blog (with regular tabletop features on the side), but this seems to have gone down as well after a time.

", which was one of the first attempts to develop a unified language for game designers to talk about their discipline — and he did it years before academic game studies even became a thing. In 2013, he published his first game design book, titled Uncertainty in Games, which explores the role and implementations of Unpredictable Results in gaming experience.

He also writes on a variety of topics; his non-fiction writing tends to focus on game design and the role of games in culture, and he has written a few science-fiction novels as well.

Other works by Greg Costikyan contain examples of: