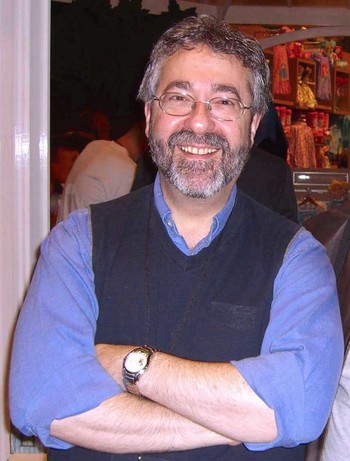 ◊.
"There's a tendency among the press to attribute the creation of a game to a single person," says Warren Spector, creator of Thief and Deus Ex.
—IGN

subscribing to The Auteur Theorynote Spector did not actually create Thief (the original idea, in fact, came from Ken Levine), and while he did serve as the first game's producer, he left Looking Glass before it released and had an even more managerial role in the third game's development at Ion Storm.
Advertisement:

Warren Evan Spector (b. October 2, 1955) is a legendary game designer and producer from Austin, Texas, best known for directing Deus Ex and Epic Mickey and often credited as the grandfather of the Immersive Sim genre.

Like many future video game designers, Spector began his career in tabletop, having been an avid player of Avalon Hill's games and Dungeons & Dragons throughout his college years. After getting his master's degree in 1980note with a thesis on the critical history of Warner Bros. cartoons, he started working as an editor in The Space Gamer magazine in 1983, before quickly becoming the editor-in-chief for all of Steve Jackson Games' publications. In that capacity, he had co-developed and published SJG's first fully-fledged Tabletop RPG, Greg Costikyan's Toon (1984), as well as writing for the Paranoia and GURPS lines. In 1987, he was hired by TSR where he worked on the Marvel Super Heroes line and the second edition of AD&D, among other things.

Spector made his break into the video game industry by joining Origin Systems in 1989, where his creative team-ups (as producer) with Richard Garriott and Chris Roberts produced two of Origin's most seminal titles, Ultima VI and the original Wing Commander, respectively (both released in 1990). While still at Origin, he was tasked with producing an Ultima Spin-Off then in development by Paul Neurath, Doug Church, et al. at Blue Sky Productions, which would become the Ur-Example of the Immersive Sim — Ultima Underworld (1992). The same year, Blue Sky became Looking Glass Studios, with Spector taking charge of its Austin branch soon thereafter — although thanks to Origin and LGS's famously cozy relationship, he had worked on a number of games by both studios between 1992 and 1997, most notably, Ultima VII Part II and System Shock.

By 1997, however, Looking Glass (then working on Dark Camelot a.k.a. Thief: The Dark Project) began struggling financially, and Spector dissolved the Austin studio after realizing that it was no longer sustainable. At that point, John Romero, who had just signed a six-game contract with Eidos Interactive, approached him with an offer to lead what would become Ion Storm Austin. Jumping at the chance to make the game of his dreams, Spector took up the offer and in 2000, released his most influential work, Deus Ex. When LGS shut down the same year after releasing Thief II, many of its staff joined Spector's studio and went on to create Deus Ex: Invisible War and Thief: Deadly Shadows, while he took a more hands-off approach. Deadly Shadows was Ion Storm's sixth and final game for Eidos, who shut it down in 2005 after Spector and other senior staff had left.note Ion Storm Austin has actually outlived Looking Glass, Romero's Ion Storm Dallas, and Origin by five, four, and one year, respectively.

After departing from Ion Storm, Spector founded Junction Point Studios in 2005, which had reportedly worked on a canceled Half-Life 2 episode for Valve Software, before being purchased by Disney Interactive Studios in 2007. There, Spector directed the development of Epic Mickey for the Wii and Epic Mickey 2, as well as wrote the 2011 DuckTales comics reboot for Boom! Kids. However, poor sales of Epic Mickey 2 prevented Junction Point from finishing the planned trilogy when Disney shut them down in 2013. After this, Spector took a break from the gaming industry to teach game design at the University of Texas at Austin.

Paul Neurath managed to lure Spector back from his hiatus in 2016 with an offer to work on Underworld Ascendant (a Spiritual Successor to their own Ultima Unterworlds) and System Shock 3 at his newly-founded OtherSide Entertainment. Spector reportedly

views these as his chance to Win Back the Crowd that was disappointed by his Epic Mickey games (even though he himself views them as a natural evolution of his lifelong systemic game design philosophy).