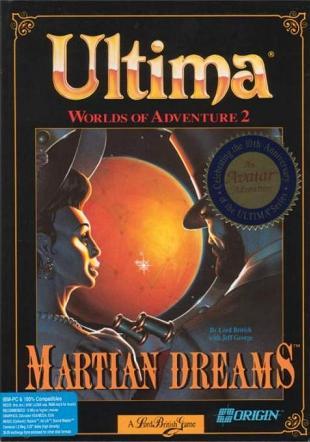 At the Columbian Exposition of 1893, Astronomer Percival Lowell unveiled his Space Cannon.
Before the greatest minds of his day, he proposed a Mission to Mars.
But disaster struck!
The cannon discharged a day early!
With the leaders of the Victorian Era on board.
Now YOU must rescue them from the Red Planet!
"Introduction"
Advertisement:

Ultima: Worlds of Adventure 2: Martian Dreams is the second game in the Worlds of Ultima series by Origin Systems, again using the same engine as Ultima VI. Whereas The Savage Empire sent you back in time to a prehistoric era, this game is set during the Victorian Era and sees you traveling to Mars.

Following the his adventure in The Savage Empire, the Avatar receives a book written by his associate Dr. Spector, only the good doctor hasn't written it yet. Following the instructions of a red-haired woman, the pair travel back in time to the Victorian Era and find themselves at the Columbian Exposition, where scientist Percival Lowell is showing off his new Space Cannon. Unfortunately due to an act of sabotage the cannon is fired with the foremost thinkers of the era on board, leaving them stranded on Mars. Now the Avatar must journey to Mars via Lowell's cannon, locate the stranded men, and find a way back to Earth. But when he arrives on the red planet the Avatar finds the ruins of an ancient Martian civilization...