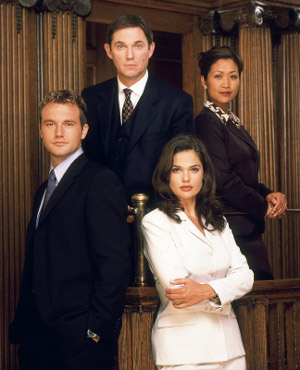 Five years ago, Alexandra DeMonaco's husband framed her for insurance fraud and kidnapped their daughter. Finally out of prison, Alex (Lisa Lackey) begins working for the law firm of Hamilton Whitney III (Richard Thomas), hoping to prove her innocence so she can become a lawyer and help others like her. Her idealism inspires Whit, who has become too obsessed with big money-earning cases and not focused enough on helping those in need. But Alex's daughter — and the $5 million her husband stole — are still missing.

Definitely not to be confused with the video game series, or with the 1995 film.

This television series provides examples of: