Ships That Pass in the Night 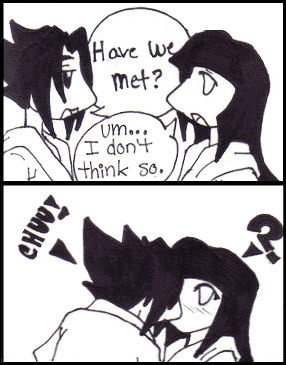 So you like to ship Bob and Alice. The only problem you have is the fact that Bob and Alice have exchanged little more than a few lines with one another, there seems to be little to no interaction between the two.

This is when Ships Pass in the Night. Most of these types of ships are Crack Pairings, but as usual Tropes Are Tools — sometimes fans can dig deep and find decent proof for their beloved ship, or at least persuade the readers that the couple would give each other the time of day. Even without this a pairing can work if written well enough, but if no transition period is shown the couple is suddenly Strangled by the Red String. One difference between this and a Crack Pairing is that these types of pairings tend to be treated somewhat seriously, and shippers of them often argue for their potential chemistry... then again, not always.

Compare Launcher of a Thousand Ships and Gotta Ship 'Em All, which can be a cause of many of these kinds of pairings. Frequently overlaps with Ship Mates, as taking one member out of their Official Couple can result in them having few obvious choices. If taken to extremes and expanded across totally unrelated franchises, this trope can result in a non-canon Crossover Ship.

Trope Namer is a remark made by Donald Hogan in Stand on Zanzibar.