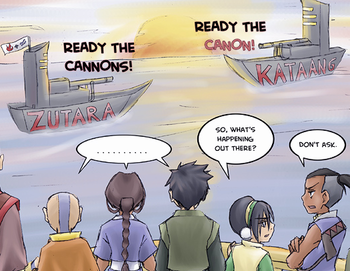 'Tis what you get

Aka. Shipping Wars. Nothing to do with naval warfarenote unless KanColle or any of the many other naval waifu games are involved. Or space warfare involving warships. Or UPS vs. FedEx. Or the A&E Reality Show based on the rivalry between a handful of independent truckers.

Many fans ship. Some of them have a distinct ship that they like over all others, while some of them are torn between contradictory pairings. Some of them like to debate a pairing while keeping in mind its status in canon, while some of them discuss it believing their pairing is canon (or, in the case of those who argue over what's going to happen like they think they're pooling money for a bet, will inevitably be). Now throw in the power of the Internet to connect everybody (and everybody's opinions) with everybody else…

Shippers tend to become emotionally invested in their pairings, and Internet shipping discussions can be quite difficult to keep peaceful. All too often, they can't help but devolve into heated quarrels where preferences are insulted, ad hominem attacks are thrown, and comparisons to Nazis are made (though, to be sure, the latter aspect is just as capable of arising from any subject of Internet disagreement currently known to exist).

These Flame Wars are known as Shipping Wars: verbal arguments between people with different opinions about romantic relationships between fictional characters, though sometimes it can include real person fiction. There are those who bash whoever doesn't like their ship of choice, those who bash whoever likes a certain ship, and those who do both, usually basing their attacks on how canon/Fanon the discussed ship is. The fact that most ships really aren't canon and will never be is usually ignored. Particular hatred for a pairing or a character who gets in the way of a pairing manifests in the form of Die for Our Ship in fic, or accusations of Canon Sue status in analysis. Alternatively, fans might pair that character with another character, getting him or her out of the way of their favorite ship. This creates "alliances" between different shippers called Ship Mates.

Common victims include Platonic Life-Partners, Heterosexual Life-Partners, and Lovely Angels. On one hand, lots of fans see Subtext, hints, and evidence where there really isn't; on the other, if there is some degree of subtext, other fans will adamantly refuse to see it and insult those who do. The Draco in Leather Pants also tends to be paired up a lot, and Shipping Wars erupt when deciding to whom he belongs. Often complicated by The "I Love You" Stigma.

Please note: someone just simply stating their opinion about whether they like a pairing or whether they think it's canon or not isn't Ship To Ship Combat or a ship war, that's just having a discussion. Or even when someone makes fun of a pairing. It's when the fans of a certain pairing start actually attacking and insulting the fans of another pairing that it becomes Ship To Ship Combat, such as if someone says they don't like a certain pairing or doesn't think it's canon and the fans of that pairing become enraged and start attacking that person for their opinion.

Trope Co., we'd like to order an emergency supply of MST3K Mantra, please.

If you really were looking for the trope about naval vessels fighting each other, try Epic Ship-on-Ship Action, Hot Sub-on-Sub Action, History of Naval Warfare, or even Standard Starship Scuffle if your definition of "naval" isn't strict.