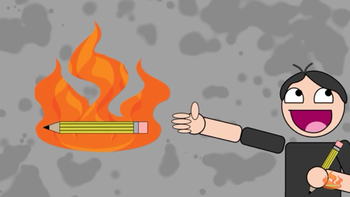 "Just click on the totally NOT symbolic burning pencil to get started!"
"Tired of finding excellent and thought-provoking writing advice on the internet? Are you frustrated by the lack of useless and inane storytelling tips on the world wide web? Where can one go to find truly awful writing advice? Well, a lot of places, actually, but also, my channel!"
— J.P. Beaubien, Welcome to terrible writing advice
Advertisement:

His videos contain, as you might expect, amazing advice given in the most honest possible tone. Each episode will cover a writing topic (such as setting, character, taking criticism, publicity, love triangles, etc.) and will give bad-*ahem*-GOOD advice that only the soon-to-be-bestseller-authors employ, such as Mary Sue, Character Shilling, and, the most important of them all, THE LOVE TRIANGLE; often contrasted by what supposedly is considered actual thoughtful writing tips or good story fodder that he'll throw in before snapping you back to reality by reminding you of how bad/wrong/boring the "actual" advice was, and then proceeding to go right back to the real advice.

These are examples of the tropes this show contains, if you want add more, Go ahead! And don't worry about whether or not the trope fits the example. Worrying about such minute details is stupid, after all.