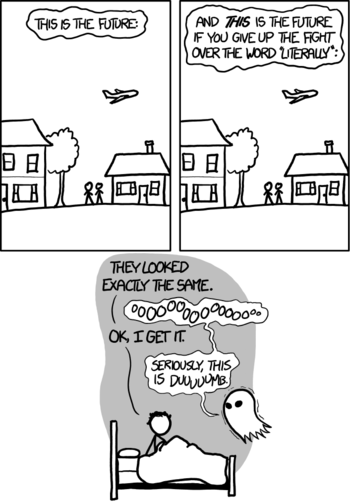 "But then the Ghost of Subjunctive Past showed up and told me to stay strong on 'if it were'."
Anders: Hating someone just because they’re a mage is a shameful thing.
Carver: I don't hate you because you’re a mage, I hate you because you won't shut up about it!
— Dragon Age II
Advertisement:

This person is generally a good guy: friendly to newbies, or at least not hostile, contributes to discussions, and so on until one particular topic is brought up.

When that one thing is brought to their attention, the Single-Issue Wonk undergoes a frightening transformation, becoming an obsessed monomaniac who won't stop hammering their position. This may go on for days at a time, entangling unwary newbies and providing the perfect furnace for a Troll to dump fuel into.

The topic can be anything, from an economic and political theory of everything to who was better, Mike or Joel. Naturally, it's less noticeable when it's something that directly relates to the topic of the forum one encounters this person in. You may also notice these individuals make very passionate additions to this very site when their wonk applies. The Grammar Nazi is another common type.

Compare Berserk Button. See also Flame War and Misplaced Nationalism for the mess they tend to leave behind. See One Tract Mind for attempting to veer any conversation towards this unprovoked. Usually overlaps with Serious Business, Righting Great Wrongs, or even a Silly Reason for War. This is also the reason most polite discussion forums have a Ban on Politics (or religion).