Space Is an Ocean 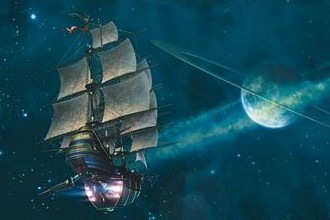 Sail onward, 'till you can't see the cosmological horizon.
"When ships to sail the void between the stars have been invented there will also be men who come forward to sail those ships."
— Johannes Kepler
Advertisement:

Maybe it's the romance, maybe it's the adventure, maybe it's the obvious parallels to the Age of Exploration, but for some reason, when people write about space, they tend to make parallels to the sea, as President Kennedy (himself a former naval officer) did in his "Space is the new ocean" speech. Often, it goes far beyond metaphor. Science Fiction writers frequently use nautical analogies for pretty much everything in space, and fill in the gaps in their own knowledge about spaceflight with details specific to sea travel.

In Space Opera, Science Fantasy and Steampunk Fantasy genres, writers are fond of filling Space with aether streams and solar winds, even magical ships with Solar Sails that literally "sail" through the Void.note Solar winds and sails are an actual thing. Bill Nye, for one, took part in a program that launched a small craft into space that, once up there, used a solar sail (essentially a large mirror made of mylar) to 'catch' the minuscule pressure imparted by reflected sunlight. Solar winds, streams of electromagnetically charged plasma emitted by stars, provide orders of magnitude less "push" per surface area than the light pressure used by a reflective solar sail, but can also be used for propulsion with very different setups known as electric sails and magnetic sails. Rather than being driven by the impact of particles against physical sheets of material, these use "virtual sails" of electromagnetic field generated by large antennae to catch the electromagnetic "push" that drives the solar wind. Prototypes have been successfully tested, and while simple reflective solar sail is simpler and requires no internal power, electromagnetic sail's have numerous advantages including lower weight, higher acceleration, and larger operating ranges from a star. In those cases, you may find you can even breathe in Space, and if you're lucky you can even ignore the vacuum. Characterization and plot may also come straight out of the archetypes created during the era of Wooden Ships and Iron Men as well — including intrepid explorers, lost colonies, an exotic beauty in every port, Space Pirates, and sightings of the majestic Space Whale.

To some extent, Space Is An Ocean is a Justified Trope: not only was space thought to be some kind of fluid until the turn of the 20th centurynote The fluid was called "luminiferous aether"; physicists knew they couldn't detect it, but thought that they simply did not have the technical skill to do so at the time. We later discovered that the reason aether couldn't be detected is because it doesn't exist. This wasn't because they were stupid back then and couldn't imagine empty space — it's because they were sure light waves needed a medium (such as air or water) to propagate through, just as sound waves do. As it turns out, light behaves as both wave and particle, making it possible for light to travel through the vacuum of space like any other matter., but seafarers long ago evolved the organizational techniques necessary to safely operate a self-sufficient vessel in a potentially hostile environment for an extended period of time, and it makes more sense to adopt nautical administrative and logistic features (and the terms for them) instead of inventing everything from scratch.

As science fiction (and the aviation industry) has matured, Space Is Air has become a complement to Space Is An Ocean. Typically, large ships like The Battlestar will be based on naval craft, while smaller craft like the Space Fighter will be treated like aircraft. The two are not mutually exclusive — far from it, applying the tropes to different vehicles allows writers to recreate World War II (particularly the Pacific theater, with its pioneering of large-scale naval aviation) Recycled IN SPACE!, which is pretty cool, as it allows using the tactics of the Old-School Dogfight and having to close to broadside range with capital ship guns. Land transport metaphors tend to fall flat. Elements of road vehicles are generally Played for Laughs; if a spacecraft has a manual transmission, it's a sure sign that Rule of Funny is a prime consideration. There is, however, a small but generally serious set of aversions (some listed below) that imagine space as a railroad instead — ranging from literal portrayals of trains in space to plots that take their inspiration from real-life railroad history.

Lots of speculative fiction in all media depict spaceships designed to land on water, since an ocean provides what amounts to an infinite runway with a similarly infinite capacity for absorbing the heat of re-entry. Some examples include the Bebop from Cowboy Bebop, the Seeker from David Brin's Startide Rising, most of the Space shuttles in Jerry Pournelle's CoDominium series, and the actual Apollo spacecraft sent to the moon (as well as the Mercury and Gemini spaceships that preceded Apollo) as well as the Huygens probe

sent to Titan, Saturn's largest moonnote This one not for that reason, but instead because it was not known if it would land on solid terrain or a (methane) ocean. It found the former.

In more realistic takes on this trope, spacecraft may be likened to submarines instead of surface ships. There are a number of similarities between the two that make such a comparison useful:

Finally, while not technically Truth in Television, this trope may well become so out of sheer cultural inertia; if it didn't become so as soon as NASA started naming space shuttles right out of maritime tradition. There's even a test shuttle named Enterprise (a case of Defictionalization). There is also the fact that the orbits of most of the planets of The Solar System have an inclination of plus-or-minus 3° from a particular plane

(the "ecliptic plane"),note With Pluto demoted, Mercury is now the only exception and even its inclination is only 6.3°, although large bodies beyond Pluto and Batygin and Brown's theoretically-possible "Planet Nine" have orbits at very high inclinations (up to 30°) to the ecliptic plane. and that the majority of the star systems within The Milky Way Galaxy spiral arms are within 1° of the plane of the galactic disc,note applies to the arms only, not the bulge or the halo, though said invariable ecliptic plane is not coplanar with the galactic disk.