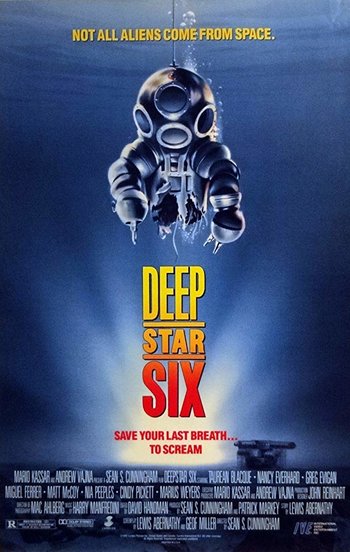 Deepstar Six has a serious pest problem.
Well, at least Snyder will get his name in the Guinness Book of Records. I mean, causing two nuclear explosions in one afternoon has to be some sort of record!!
— Jim Richardson, at the start of what proves to be a REALLY bad day
Advertisement:

The crew of DeepStar Six, an underwater naval facility tasked with deploying nuclear missile launchers on the sea floor, explosively opens an undersea cavern while hurrying to complete the last week of their tour. In doing so, they unleash an extremely large, aggressive arthropod that proceeds to make mincemeat out of the facility and the crew.

The film was directed by Sean S. Cunningham, who also directed the original Friday the 13th, and stars Miguel Ferrer. While released the same year as The Abyss and Leviathan (1989), DeepStar Six is more of a shameless ripoff of Aliens in an underwater setting. However, much like Leviathan, it was poorly received and did not perform well at the box office.