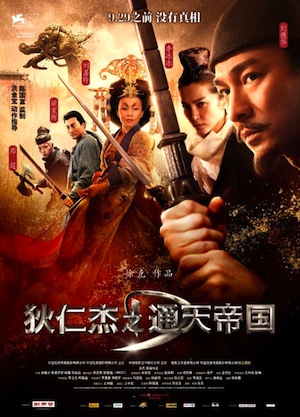 Detective Dee and the Mystery of the Phantom Flame is a 2010 People's Republic of China/Republic of China co-production. The title character is loosely based on the real-life Tang Dynasty magistrate/ chancellor Di Renjie (played here by Andy Lau), who also inspired the Judge Dee novels and short stories. The film is not based on those novels however, and relies primarily on wuxia action.
Advertisement:

The plot takes place shortly before the ascension of Wu Zetian (Carina Lau), China's first female emperor, to the throne. An enormous Buddha statue is being built for the occasion when the director of its construction mysteriously bursts into flames and dies. With the supervising builder Shatuo (Tony Leung Ka-fai) a dead end, the investigators are baffled until Wu Zetian calls on Detective Dee, a man whom she imprisoned eight years previously for opposing her rule. With the imperial agent Shangguan Jing'er (Li Bingbing), and young policeman Pei Donglai (Deng Chao), Dee has until the coronation date to solve the mystery of the phantom flame.

A second movie with the subtitle Rise of the Sea Dragon was released in 2013. It is a Prequel, with time shifted actors for returning characters (Dee and Shatuo) except Empress Wu, focusing on Dee's first case in Luoyang. With the residing police chief Yuchi in his way, and new ally Shatuo on his side, Dee must come to the rescue of Ruiji, who is seemingly targeted by both a nomadic cult and a reptilian creature from the depths. Unfortunately the capital has an even bigger concern. Big enough to sink an Imperial fleet, as a matter of fact.

Detective Dee: The Four Heavenly Kings is set for 2018 with the cast returning from Rise of the Sea Dragon.

Rise of the Sea Dragon has examples of:

The Four Heavenly Kings has examples of: